A photo sphere is a 360Â°Â immersive image similar to what you see in a location of Googleâ€™s Street View. While creating one is not as straightforward as snapping a photo, they are not difficult.

First youâ€™ll need a relatively recent iPhone or Android phone with an accelerometer (gyroscope) and GPS. Google recommend any iPhone running iOS7 or later or any Android phoneÂ running OS 4.4 Kit Kat or later. Generally this should also work with tablets but I donâ€™t have a lot of experience with using them for photo spheres. 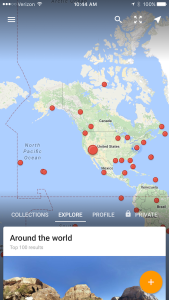 Open the app, tap the + in the lower right corner. Then tap the camera icon.

Hold the phone vertically with both hands directly in front of your face and move until the white circle encloses the orange circle. Wait until the app indicates it has taken the shot. Move your body (not your hands) to the next orange circle and wait for the app to take the shot.

Repeat those steps until youâ€™ve captured all the necessary images. Donâ€™t forget to look straight up and straightÂ down. Youâ€™ll know when youâ€™ve got them all when the progress ring at the bottom center of the screen turns green. 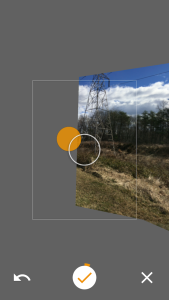 When the ring turns green, tap it and watch peg man assemble your photo sphere.

By default, your picture is saved in the Private section of the app. At any time you can publish the photo sphere to your Google Maps account by opening the image and tapping the upload icon in the lower right corner. If you are not logged into a Google account, it will prompt you to do so. After the upload, the photo sphere can be viewed under the Profile section.

Your photo spheres can also be viewed in Google Maps on a computer or mobile device. Just tap the hamburger menu in the upper right corner of the screen, choose Your Contributions and then Photos.

More information about creating and publishing Photo Spheres can be found onÂ Googleâ€™s Street View site. This includes special cameras that allow you to take immersive images with one click, as well as 360Â° video.

Work in Good Light – As with any picture taking, light is important. If your camera doesnâ€™t take good photographs in low light, your photo spheres wonâ€™t be any better.

Avoid Moving Objects – Since you are taking a collection of overlapping images, if something moves between shots, youâ€™ll get some funny results. Take your pictures at a time when there arenâ€™t many people and work as fast as you can. My photo sphere from the Great Wall of China is a good example of this issue. Why canâ€™t all those tourists just stand still for a minute? :-)

Move Your Body – Hold the phone with two hands in front of your face and move your body to get each shot, not your hands. The smaller the space in which youâ€™re working, the more important it is to maintain a consistent pivot of the camera.

Get Everything – Try to get the shots in a consistent pattern. Do a complete circle at eye level, then move to do the same tilted up, then straight up. Keep an eye on the progress circle to see how youâ€™re doing. However, donâ€™t worry if you miss an orange dot. You can go back and capture that stray shot. Again, my shot from the Great Wall shows what happens when you miss one of the dots (look straight up).