I feel a little guilty. I gave in and paid Marriott’s $10 extortion fee for internet access. It’s been next to impossible to find a reliable wireless signal at the conference so I guess I can justify the extra line on the hotel bill.

But I shouldn’t have to.

It’s always great to pick up some new ideas at conferences like this. However, occasionally it’s also nice to sit in on a presentation where the speaker reinforces what you already know and believe. Preaching to the choir as it were. 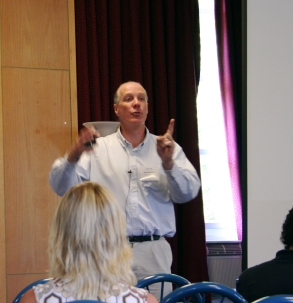 That’s Will at his session this morning spreading the word about blogs and other forms of New Internet Literacies. With me playing choir boy.

At the closing reflections session, Alan November asked us to use a wireless response system to respond to some questions about the day’s events.

Since there were only enough of the little egg-shaped keypads for every fourth person, the process was informal (and a little chaotic :-). But he asked two questions that I’d love to try out on a room full of teachers and administrators in our system.

To the first question, a plurality chose teachers followed not too far behind by the government.

To the second question, more than 90% of the group said the students.

Would that it were so.