Now here’s an interesting intersection of religion and technology. 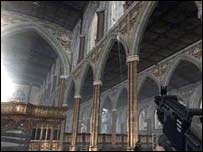 The Church of England is demanding Sony remove a new game from the shelves because one of the locations pictured is Manchester Cathedral, a property owned by the Church.

Sony says they received “all permissions necessary” to use the images while Church officials say they didn’t and are threatening legal action if they company doesn’t comply with their demands.

While this is certainly an example of poor taste on the part of the game designers, does the Church have a case?

I have no idea whether British law covers this kind of thing, but I think in the US it is possible to obtain copyright or trademark protection for buildings. Haven’t the owners of the Chrysler Building in New York and Frank Lloyd Wright’s Falling Water, among others, done just that?

Nothing profound to say here (as if I ever do). Just one of those stories that grabs the attention.