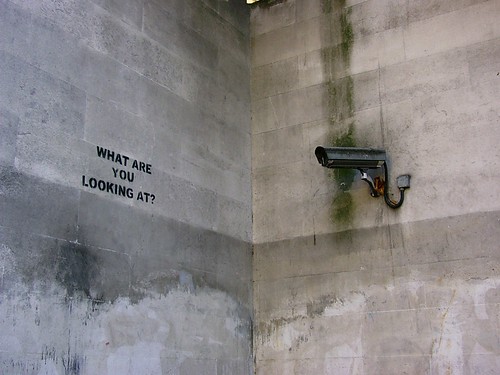 However, the Times article and the chatter around it recalled for me an important observation by Edward Snowden on this topic.

Ask yourself: at every point in history, who suffers the most from unjustified surveillance? It is not the privileged, but the vulnerable. Surveillance is not about safety, it’s about power. It’s about control.

For those who say it doesn’t matter since “I have nothing to hide”, he also makes this analogy.

The companies, organizations, and now schools buying into these AI-powered surveillance systems don’t really care if you have something to hide. They just want to collect enough information to maintain control.

That’s not being paranoid. It’s being realistic.

The photo is from the Flickr feed of Duca di Spinaci and is used under a Creative Commons license. It was taken in London and, as best I can determine, the image is genuine since several people have posted variations on it over the years.