One-to-One is Here to Stay. Maybe. 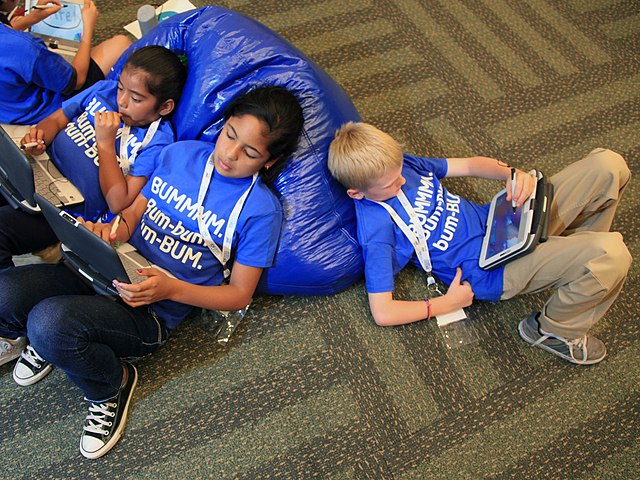 Very early on in the pandemic, we read a lot about schools “reinventing” themselves as a result of the major shock that came from a sudden shift to online schooling. The story postulated that educators and others, who knew that the system wasn’t working for many students before, would use this as an opportunity to push for major systemic changes.

It ain’t gonna happen. At least not here in the overly-large school district.

Pretty much everyone around here – teachers, parents, kids, political leaders – is anxious to reset school to the way it was one year ago. With kids in classrooms, lead by teachers, studying the usual subjects, preparing for spring tests. Oh, so much test prep.

I’m sure this future-view is not unique to our little corner of the world. But that doesn’t mean nothing will change when the pandemic is mostly passed.

At least we finally managed to get one-to-one computing in Fairfax.

For decades prior to 2020 we played with this concept. The one where every student is given a network-connected device to use as part of the learning process.

Over the many years I worked for the district, there were many attempts to make it happen. They all fell apart, mostly because of money. A principal or administrator found the funds (and political will) to begin the process and after a year or two of a “pilot” they leave or their replacement has other priorities.

In the most recent one-to-one initiative, the school board voted to begin a system-wide one-to-one project, with a five-year schedule to finish the initial rollout to every student in every school. Assuming the funding kept coming (based on past experience, not a sure thing), it would have finished some time in 2022.

Then the pandemic came along and forced the issue. After all, you can’t do online schooling for every student unless they have a device to get online with.

Considering all the money that’s been spent on laptops over the past year, I expect one-to-one computing will stay for a while. At least until the machines start breaking and administrators start waffling (again) over the annual cost to regularly replace devices for 180,000+ students.

However, there is still something missing from those those default-for-now, one-to-one plans: a clear idea of why we ever wanted to do this in the first place. Specific instructional justifications for why every student should have a device of their own. Besides adding lots of technology, what else about the schooling process needs to change?

Because, in all the many attempts to do one-to-one over the years, the emphasis was largely on the technology and logistics. There was very little consideration of the curriculum the kids will study, the activities and assignments they are expected to complete, the way they are assessed on their learning, and pretty much everything else about school. We rarely talked about how fundamental parts of the equation should change.

And, in the rush back to “normal” (a really crappy idea, by the way), all the new bits of technology will probably remain. But I doubt there will be much discussion around those other, more important factors.

Image is from the Wikimedia Commons and used under a Creative Commons license. If we’re going to do one-to-one computing, it should look more like this than kids sitting at desks, all with the same computer, in a classroom. I’m a big advocate for bean bag chairs as a seating option.