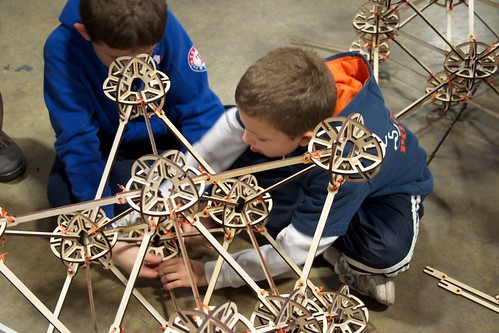 The business magazine/website Fast Company is not a place I normally look to find writing about education (at least not good writing), but a recent post on their blog caught my eye.

The short piece is by a high school sophomore who has some suggestions for “how schools can teach kids to solve real-world problems”.

When I took engineering during my freshman year, I hoped it would give me the tools and process to develop those kinds of ideas. Instead, we focused on building a solution without first examining the problem. We learned how to draw blueprints from all angles and the names of different mechanics such as pulleys, gears, and levers. We ended the year by using shop tools, such as saws and lathes, to make simple mechanical objects and then using those skills to create one large project such as a mini-car or a primitive clock. We learned how to follow instructions to turn an idea into a prototype, and while that’s a useful skill to have, I think engineering is much more than that.

Disregarding the fact that most high school freshmen don’t even have the option to take an engineering course, this young man has landed on one of the biggest problems with most classes they do take. Kids are asked to produce solutions to “problems” with very little consideration to where they came from in the first place.

Anyway, following a visit to a biotech lab in Boston, this young man came to the realization that “engineering isn’t just about knowing how to make cool stuff; it’s about solving problems”. And he took the initiative to write a curriculum for a problem-solving middle school engineering course.

While his curriculum has some flaws (For example, I’d like to see a more creative assessment system than applying a standard grading scale), it is a good foundation for the kind of open-ended learning students should be doing in school.

All of it needs to better reflect their interests and talents, rather than imposing an adult perspective, often from times past, of what is worth learning.

The pictures shows a couple of boys working on a construction projects at the 2012 USA Science and Engineering Festival.

other people's words, teaching and learning