February 2020 was the fifteenth birthday of Google Maps and since that beginning, their geo architects have been building out an array of resources to help students visualize the world.

But the three tools I’ll be comparing below are about more than just looking up places on a map. They allow students (and their teachers) to build interactive, media rich projects that can enhance everyone’s understanding of the world.

For each, I’ll give you a basic idea of what it can and cannot do, the technical requirements, and links to a few examples. All this information was accurate on the date published or updated, and like anything else Google-related, is subject to change. 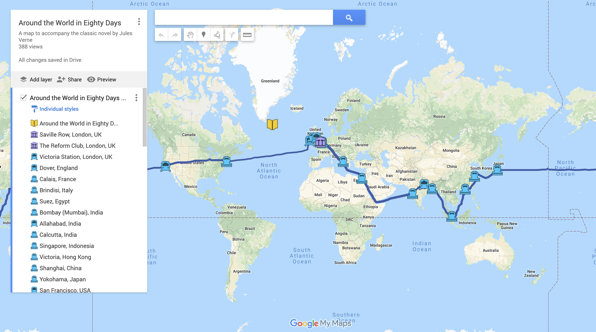 My Maps takes Google’s basic map as the foundation and allows users to add layers of place markings, lines, and areas. Each element can be opened to show text, images, and videos selected by the creator. Maps can be shared for collaboration or just viewing. 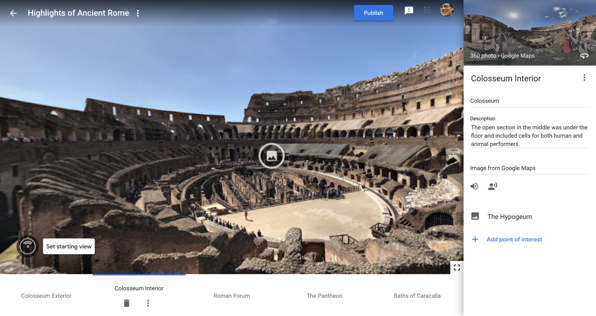 Tour Creator uses as it’s foundation Google’s Street View 360° images to build tours similar to those in Google Expeditions. Creators can also upload 360° images they have made. Each scene in a project can also include text, regular images, and audio. Once published, projects can be viewed by anyone with the link but there is no option for collaboration. 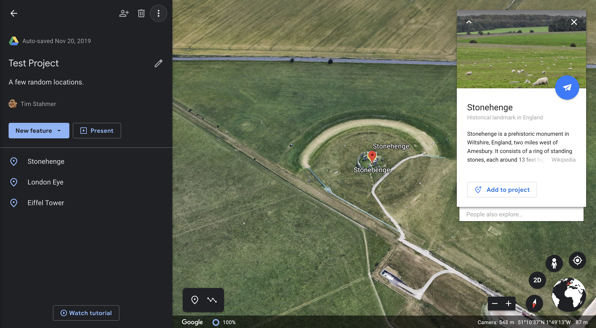 The project feature in the browser version of Google Earth allows creators to build tours similar to those in the Voyager section. Each scene can show a “map” (actually an aerial view of the location) or a Street View 360° image. Projects can also incorporate text, still images, and video. Projects can be shared for collaboration or just viewing.

Google also has two legacy systems that can be used to create projects but I don’t recommend either, most because of the lack of support from the company.

The desktop version of Google Earth is the original software implementation that uses satellite and other aerial imagery to display locations on a globe. The program has a rich history, going back to the original release in 2005. Earth has a large collection of tools that allow creators to build layers that can include a wide variety of media including HTML code, images, overlays, text, and interactive features.

However, building projects can be complicated and they cannot be shared for collaboration. Also, viewing projects requires the distribution of files and the software (which is free) must be installed on each computer. The program will not run on Chromebooks and may not work well on older computers with slow processors and underpowered graphic systems. Projects in progress are stored within the local version of the software.

Finally, we have Tour Builder, a Google beta project since it was first launched around 2013. The original system allowed users to build projects on top of a jerry-rigged version of Earth. When the Chrome developers stopped supporting the plug-in that was required, Tour Builder started using another, less capable mapping system.

The concept for what Tour Builder was supposed to be has now been fully incorporated into Google Earth Projects, which is why I do not recommend using it. I have a feeling it will silently disappear in the near future.

Welcome to the most recent edition of AssortedStuff | Tech. Here you'll find the notes from sessions and workshops I've presented as well as other materials I use to train and support teachers (and others) who want to use technology to improve their professional practice and personal productivity.