Celebrating The Blog… and Lesser Things 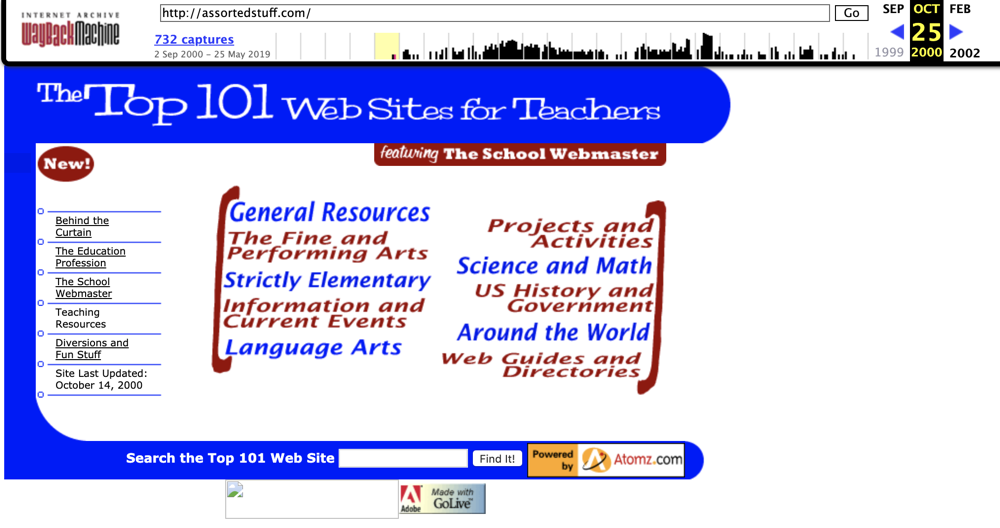 Not this blog; that came along several years later.

It doesn’t even mark the first time I posted a site to the web. That happened several years earlier when my ISP (very much a dial-up service) began offering a small amount of space for posting HTML pages, with the very unintuitive address of www.infinet.com/~tstahmer

No, it was twenty years ago today that I first took a lease on this domain name.1 Back in the days when the web was still a very new toy and so many interesting dot com names were available… and I chose AssortedStuff.com anyway. It’s rather boring story.

Ok, so this particular event is little cause for general celebration, but I think it’s pretty cool. And it’s my website.

Speaking of blogs, this year is also the twentieth anniversary of the noun “blog”, a mashup of “web log”. Not long after, the term was turned into a verb, as is done with far too many nouns these days.

I’m not even sure I was aware of blogs in 1999. This was long before Twitter and other social networks. The first I remember hearing about the idea was in a talk by Will Richardson and discussions with other educators at a NECC conference, probably around 2002.

But, as I said, this domain predates my blogging. My original goal in establishing this small web island was two-fold.

First, being a card carrying geek, I wanted to experiment with running a website. Something with a unique name, on a server I had some control over. Since owning that server was way outside the budget, a shared hosting account and a .com domain were the best I could do.2

The second purpose was to continue posting my narrowly curated set of resources for teachers who wanted to use the internet in their instruction. But a little fancier than just lists of links on a page. Sort of a very narrowly defined version of the then-dominant Yahoo directory.

That graphic up there, pulled from the Internet Archives Wayback Machine, is an early version of my attempt to craft a website. Please don’t laugh too loud. It was the best I could do using my limited graphic skills, and a basic understanding of the software called Fireworks and GoLive (both later bought and killed by Adobe).

Anyway, anniversaries like this are welcome opportunities to renew vows, rejuvenate traditions, and build on foundations. So, I’ll end this meandering rant with this wonderful and very appropriate thought from one of many posts I’ve run across celebrating this year’s unofficial anniversary of the blog.

Technologies, like hemlines, go up and down. It was all about the web, then AOL, then “push,” then Web 2.0, then email was “dead.” Then came social media, then Slacks. Along the way newsletters popped back up, almost as if they were a new thing (my first one, which I founded while an editor at Tower Records, ran for a decade, beginning in 1994), and the podcast has had a second, robust economic and cultural life.

Throughout, blogs just worked, even if they’ve seen better days. Self-publishing is at the heart of the healthy internet. It’s truly self-publishing when the URL and the means of production are your own. Celebrate the 20th anniversary of the word “blog” by thinking of something important to you and then blogging regularly about it.

And that is exactly how I plan to continue using my small corner of the great big web. I would love to see more educators doing the same, blogging about whatever they find interesting.

1. As far as I know, no one “owns” their domain. It’s more of a year-to-year lease, up to ten years at a time if you’re willing to pay upfront.

2. I think I paid $50 a year for the registration through Network Solutions, at the time one of two companies authorized to “sell” domains. The hosting service was around $15 a month and offered very little storage space. Of course, at the time, I didn’t require much.

Last Wednesday was the 25th anniversary of the world wide web. Or at least March 12, 1989 was the date Tim Berners Lee published his proposal describing the concepts behind the web. Ok, any excuse for a celebration.

At first the Guardian article 25 things you might not know about the web on its 25th birthdayÂ looks like just another x-number-of-stuff list tied to the anniversary. But it’s actually a very good overview/opinion piece about why the web has become so powerful in its relatively short lifespan. And why it’s important to fight back against the many corporations who want to limit and restrict that power.

That thing number 3 is especially important.

The importance of having a network that is free and open. The internet was created by government and runs on open source software. Nobody “owns” it. Yet on this “free” foundation, colossal enterprises and fortunes have been built — a fact that the neoliberal fanatics who run internet companies often seem to forget. Berners-Lee could have been as rich as Croesus if he had viewed the web as a commercial opportunity. But he didn’t — he persuaded Cern that it should be given to the world as a free resource. So the web in its turn became, like the internet, a platform for permissionless innovation. That’s why a Harvard undergraduate was able to launch Facebook on the back of the web. [emphasis mine]

I love that phrase “permissionless innovation”. It’s the true power of the web, covering work done by the developers of the software behind this site, Twitter, RSS, Evernote, and all the other web-based resources that I and many others use every day. Just the fact that anyone can throw up a blog like this one without filing a bunch of official forms and for only pocket change is amazing.1Although I am not in any way equating those other achievements to the misguided rants posted around here.

It’s also a concept we should be teaching our students, although the concept of kids doing something on the web and not asking permission is one that really, really scares a lot of people. Anyway, today is the 30th anniversary of the announcement of the Apple Macintosh computer2That video makes clear that Jobs had already developed his Reality Distortion Fieldâ„¢. and, having owned and used a variety of command-line computers prior to 19842Apple II, TRS-80, and Commodore PET among them, the graphical interface in this new machine grabbed my attention like nothing before it. Based on the message boards I frequented at the time (Facebook’s great grandfather), I wasn’t alone.

Celebrating a Decade of Learning

Although I find it difficult to comprehend, it has been ten years since I began blogging in this space.Â I’m not entirely sure of the start date (sometime just after the end of winter break 2003) since my first entries disappeared a few months after being posted. The web is probably better for the loss.

In the beginning my purpose was more about understanding this then-new communications concept and I was building the pages one at a time, largely because I didn’t know anything else. I understood HTML so it should be easy to make this work, right?

Well, not really. But I got some great advice from a few other educators who were already writing in public and soon moved to the Movable Type system. A year later I discovered something even better – WordPress – switched again (fortunately it came with a great MT import tool), and have grown with that platform ever since.

However, in the process of learning the technology I also developed some writing skills, something I rarely had to do much of after college. I certainly won’t claim to be a great writer but looking back through almost a decade of archives, I surprised myself. Some of this stuff is actually pretty good.

The process has also opened the opportunity to meet a whole lot of smart, interesting people, something I consider to be of even greater value.

Anyway, thanks for reading this rambling mess, both this post and the rest. I promise to make more sense next time.