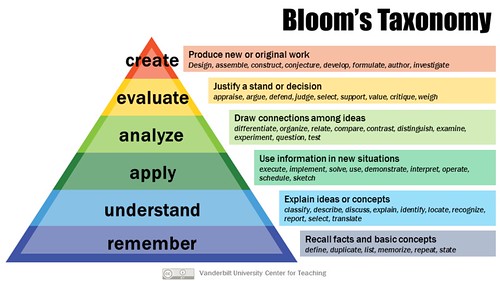 The current wave of education technology has been fraught with pedagogically unsound replications of the worst aspects of teaching and learning. Rather than build new opportunities for students to move beyond the most basic building blocks of knowledge, much of Silicon Valley has been content to recreate education’s problematic status quo inside the four corners of a Chromebook, and then have the gall to call that innovation.

Bloom, of course, refers to the Taxonomy of Educational Objectives represented in the pyramid that should be familiar to every educator. But it’s also true that most edtech is stuck on the lower rungs of the scales specifically designed to assess the quality of technology use (lookin’ at you SAMR).

Anyway, how do we get the use of instructional technology out of Bloom’s basement?

Climbing up Ben Bloom’s learning hierarchy won’t be easy, but it is necessary if we want to build education technology capable of helping learners move beyond basic remembering and understanding. There are two ways to do this: better tech or less tech.

Better tech entails leveraging cutting edge research in areas like machine learning to provide students with targeted feedback that scaffolds their learning experiences as they move up the pyramid. Less tech entails building technology that knows how to get out of the way and allow for more meaningful interactions to take place in the classroom. Today’s education technologists are exploring both approaches.

At this point he heads off into a promotion of products from his company, software he puts under the “better tech” category. And this is where he loses me.

Because I would argue that “less tech”, using the basic tools in creative ways, is the better path. Especially since that “better tech” he praises sounds a lot like programmed learning systems that are more about automating that “problematic status quo” he criticizes at the beginning of the post.

Even better than “less tech” would be technology that is controlled by students and used by them to explore, create and communicate. That, however, would require changes to the education system that go way beyond selecting software and devices.

The image is from the Vanderbilt University Center for Teaching and is used under a Creative Commons license.

This is, of course, a “modern” revised version of the concept. The original pyramid, one of “three hierarchical models used to classify educational learning objectives into levels of complexity and specificity” developed by a team of educators chaired by Benjamin Bloom, had synthesis and evaluation as the top two segments.