Returning to a topic I’ve ranted about several times since the 2016 election, indifference.

END_OF_DOCUMENT_TOKEN_TO_BE_REPLACED 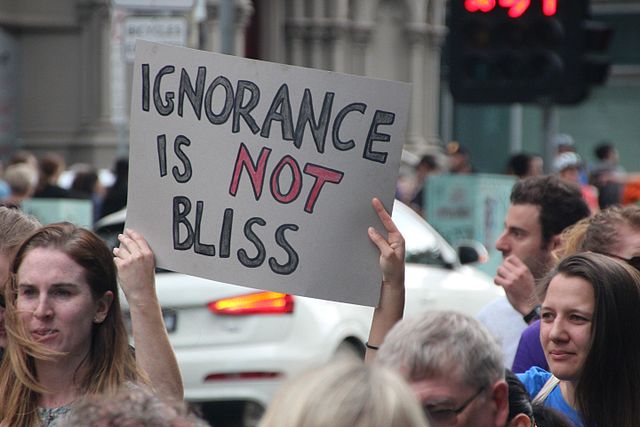 This will be my only post about the election. Feel free to ignore it.

Clearly the constitutional election process itself is royaly screwed up. Twice in the past twenty years, the person who received the highest number of votes for President lost. The fact that we continue with this system just because it was written by the sainted founders is absurd to the highest power and needs to be fixed.

However, there is another major flaw reflected in this election, one that has become integrated into our society. And I feel that it is even more responsible for all the crap that is coming in the next four years. It’s one that can be fixed, although I fear, not easily.

This quote, courtesy of the always wise Audrey Watters (by Antonio Gramsci, who died in a Fascist Italian prison in the 30’s), explains that flaw very well.

Indifference is the dead weight of history. Indifference plays an important role in history. It plays a passive role, but it does play a role. It is fatality; it is something that cannot be counted on; it is something that disrupts programmes, overturns the best made plans; it is that awful something that chokes intelligence. What happens, the evil that touches everyone, happens because the majority relinquish their will to it, allowing the enactment of laws that only a revolution can revoke, letting men rise to power who, later, only a mutiny can remove.

I am alive, partisan. And, therefore, I hate those who do not take sides; I hate the indifferent.

Hate won this election, on a technicality. But hate also received a massive amount of assistance from that dead weight of indifference.

We have a significant number of citizens who suffer from that lethargy Gransci described. The loudest and most obvious group are those who refuse to vote, except for a flawless candidate who perfectly fits their unique mold. They are the parasites who are too utopian to take sides.

But they are relatively few in number.

Far worse are the large numbers who vote while being steadfastly, sometimes proudly, indifferent to even the most basic issues that most directly impact them. They refuse to do the work of educating themselves (something those sainted founders believed would be a fundamental requirement for representative government) and then demanding candidates explain clearly how they will address those issues. For them simplistic proclamations are just fine, thank you. Never mind if they make sense or are even possible.

We can almost excuse people for not learning enough to make an informed decision since they are served by a news media (mostly television) that has become almost completely indifferent to filling the basic role of the journalist. Of offering their audience the necessary details about problems we face as a society and then providing the context they need to make an informed decision. Don’t give me the crap about the need for “balanced” coverage. That concept is a myth. It’s impossible. Every issue has multiple sides and they are never equally weighted. If all sides were equal, then doing nothing would be appropriate and we move on.

To CNN, NBC, and the rest1, information and truth are far less important to these hacks than ratings and clicks – chasing the almighty demo and the profits they bring. Twenty four hours of indifference.

The combination of an uninformed public and media companies who keep them that way give us elected officials who themselves are indifferent (or openly hostile) to the needs and voice of anyone not providing the cash they need to retain their jobs. With the result that Lincoln’s line in the Gettysburg Address about a “government of the people, by the people, for the people” becomes pretty much a joke.

Yes, hate is now in control here in the US. But the real evil in our political process is the indifference that allows it to happen.

Will that change? Can it change? I have to be optimistic because the alternative is not a positive society.

1. At least Fox is relatively up front with their biases. They don’t even pretend to do “journalism” most of the time.

Today is Election Day in the US, and on the ballot we essentially have two choices.

Members of one group who are obstructionist and fearful of any change, except for that which longs for return to a past that never really existed.

Members of the other group who talk a good game when it comes to change but who aren’t even willing to associate with the few positive advances they have brought about.

And then we have the media covering the election process, most of whom have absolutely no interest in educating their audience, instead spending their limited resources on two things: promoting fights between the two groups and scoreboarding the results.

So, I will do my civic duty and cast my ballot later today. Everyone in this country should do the same.

As always, I hope the people who are elected to office will intelligently address the many complex problems we have in this community/state/nation and work to find meaningful solutions to fix them.

It’s just so damn hard to be that optimistic.

Today is election day in Virginia and, unlike most places in the country, we have some major positions to fill: Governor, Lieutenant Governor, Attorney General, and some members of the state legislature.

Even after all the political crap I’ve seen over the years, I still take voting seriously and believe (possibly naively) that elections have consequences. When I go to the polls, I want to be positive and cast my vote FOR someone and their positions, not against someone/something.

Unfortunately, that’s not the situation we’ve been given this year. The candidates I voted for today are hardly inspirational and didn’t run on any particular platform other than trying to define their opponents as scary bad people who will screw up both government and people’s lives.

Except that this time they probably are right.

Based on everything I’ve read, the candidates I voted against have their social and political belief systems firmly rooted in the 1950’s, if not the 1850’s. Old Testament1Â religious concepts prevail over logic, science, and progress. When it comes to my primary area of interest, education, I have no doubt that, given the chance, they would sell off the entire public school system to the highest bidder.

So today I cast my ballot for the names that were not them and hope that next time2, we get some candidates willing to take bold, positive stands on the issues. We can only hope.

1 Sorry, couldn’t help linking that phrase to the Ghostbusters clip. :-)

2 Which will be in four years since Virginia is a very strange political place where the Governor can only serve one four-year term, which means all state planning involves very short term thinking.