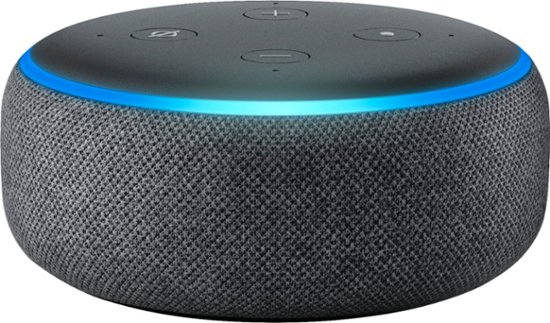 The ISTE mega conference ended it’s run for this year yesterday and, although I wasn’t able to go this year, I know from experience one of the first questions attendees will get when they get back to work: “What’s new?” Or “what was hot?”

One attendee that actually gets paid to hype the new and hot at ISTE is EdSurge, a cheerleader for the edtech industry. They seem to think that Alexa, Amazon’s voice-activated AI system, is about to take off.

Four-and-a-half years after Amazon first released Alexa, its voice-activated virtual assistant, the technology is finding its footing in education.

Across the massive, brightly colored expo hall at ISTE 2019, the annual education technology conference where companies display and demo their latest gadgets, upgrades and software, several vendors showcased the new skills they have developed for Alexa-enabled devices.

I’m not sure three examples, one of which sounds more like a promotion for the ACT college testing program, could be considered any kind of trend towards creating a “footing” in education.

They also spoke with an educator who is very enthusiastic about the potential for Alexa as an instructional tool, despite the fact that Amazon itself has warned against using their devices in the classroom. She’s using something called Amazon Blueprints, “a website that allows users to build custom apps on the voice-enabled devices”, to create applications for her students to use.

Of course, the EdSurge writer doesn’t address the potential data privacy issues involved with having a device that records everything it hears in a classroom, other than to link to two other articles.

I also wonder whether having students interact with those “custom apps” is a good use of their time. At this point, Alexa’s “thinking” is a rather simplistic, yes-or-no, this-or-that kind of interaction, and the classroom applications I’ve read about (here and elsewhere) certainly reflect that.

As I’ve written about before, a better used for this kind of AI in the classroom would be to enable kids to investigate how Alexa works and programming it themselves.

Update: If you’re interested in digging deeper into the privacy and data issues surrounding Alexa and other AI devices in the classroom, the article “Voice Assistants in the Classroom: Useful Tool or Privacy Problem?” by Susan Bearden from last November has a lot of good information.

Hey, Alexa. Push the clock ahead a few hours so I can get outta here. :-)