I know, a big chunk of my life is spent in a strange little bubble.

Last Wednesday afternoon, my Twitter feed exploded with surprise/anger/sadness over Google’s announcement of the impending death of Reader. In the normal world, most people were coping with the usual end-of-week issues and thinking about the weekend.

Ok, so Google’s corporate decision to shut down a service that wasn’t making any money for them isn’t a big tragedy, even to most in my decidedly geek twitter feed.

But at least for me it’s a big annoyance, for two reasons.

The first comes from having to find a replacement for Reader. RSS is one of the cornerstones of my information flow and almost every app I use in that category is tied to it. Going without RSS management tools is just not an option. Â

Fortunately, there are already alternatives (Feedly and NewsBlur are two I’m playing with at the moment) with lots of smart people working on others (digg for one). I’m also hopeful that Marco Armant, creator of Instapaper, another cornerstone for me, is right when he speculates that because of Google’s decision we are “finally likely to see substantial innovation and competition”Â in this space for the first time in a decade. 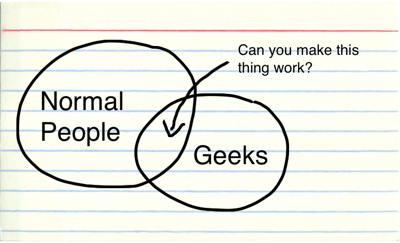 The second annoyance, and theÂ difficult part,Â is finding an RSS aggregator that will be easy to explain to all the not-so-geeky people I work with on a regular basis. Teachers, librarians, school administrators, and others who need systems for managing their ever increasing information flow that are better than bookmarks, email, and other 20th century tools.

Over the past five years or so, I’ve probably done twenty presentations and workshops around the concept of managing information in an age of data overflow and being viewed on multiple devices (one example). In every one of them Google Reader, and apps that use the service as the back end, was featured front and center. I’m doing another in a couple of weeks so some fast editing is in order.

But that’s my problem, and I doubt anyone at Google is at all concerned.

Which brings us to another lesson from all this that I need to include in my sessions: never assume that even the best companies have your interests as their first priority, unless you’re related to the CEO.

The graphic is my lame attempt to imitate the work of Jessica Nagy at the wonderful This is Indexed. Sorry.

Bud Hunt has written an excellent response to those teachers in his district who want the internet filtering system to do their jobs for them.

Here’s the essence of his post, something that should be at the heart of every district’s philosophy in this matter.

What we’ve decided is that we will no longer use the web filter as a classroom management tool. Blocking one distraction doesn’t solve the problem of students off task — it just encourages them to find another site to distract them. Students off task is not a technology problem — it’s a behavior problem. It is our intention that we help students to learn the appropriate on-task behaviors instead of assuming that we can use filters to manage student use.

It’s even more true when it comes to classroom management.