Perceived threats to “national security” make politicians and pundits say stupid things, especially aboutÂ privacy rights. There’s just no other way to put it.Â Open almost any informationÂ source, or Fox “news” if you must, at almost any time of the day for plenty of examples.

Following the recent events in Paris, cameÂ another round of those stupid things, including callsÂ to ban communications tools that don’t allow governments to have “backdoor” access to every bit of information sent, including this one from the British Prime Minister.

He said: “In our country, do we want to allow a means of communication between people which […] we cannot read?” He made the connection between encrypted communications tools and letters and phone conversations, both of which can be read by security services in extreme situations and with a warrant from the home secretary.1I love that someone from an opposition party in the UK said that the Prime Minister is “living in cloud cuckoo land”.

We have plenty of high profile peopleÂ in this country who alsoÂ want the government to haveÂ thatÂ backdoor as a tool to keep us “safe” from bad guys. Even though the NSA, our ownÂ literal “big brother”, is alreadyÂ hoovering up every bit of communications data they can find. 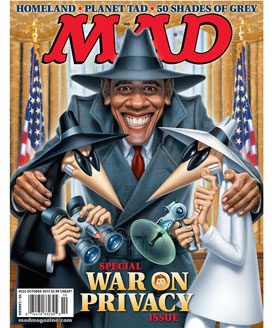 However, as Cory Doctorow, the EFF and many other smart people have pointed out, “backdoors” won’t just be used forÂ honest law enforcement.

What David Cameron thinks he’s saying is, “We will command all the software creators we can reach to introduce back-doors into their tools for us.” There are enormous problems with this: there’s no back door that only lets good guys go through it. If your Whatsapp or Google Hangouts has a deliberately introduced flaw in it, then foreign spies, criminals, crooked police (like those who fed sensitive information to the tabloids who were implicated in the hacking scandal — and like the high-level police who secretly worked for organised crime for years), and criminals will eventually discover this vulnerability. They — and not just the security services — will be able to use it to intercept all of our communications. That includes things like the pictures of your kids in your bath that you send to your parents to the trade secrets you send to your co-workers.

Plus, as DoctorowÂ also points our, similar requirements and technological solutionsÂ haven’t worked in much more restrictive countries like Russia, Iran, and Syria.

Ok, I’m no security expert, although I do have a good basic understanding of the technology involved. This is simply the rant of someone who is tired of being told by an assortment of largely untrustworthy figures that we must give up rights, Constitutional and other, for an uncertain and vaguely definedÂ promise of “security”.