Tangier is an interesting little corner of Virginia. It was first visited by English explorers, including John Smith, in the early 1600s and has had a permanent settlement since the 1770’s.

Recently, the island has become a symbol both for the effects of climate change,1 as well as for those who stubbornly cling to climate change denialism.2 Tangier has lost nearly 67% of it’s land mass since 1850 and is expected to become uninhabitable within the next 50 years due to rising sea levels.

This past July, I spent a few hours3 in this unique environment, with the chance to make some interesting photos. Ironically, we were supposed to visit in May but had to cancel due to a storm that brought heavy rains, high winds, and flooding. 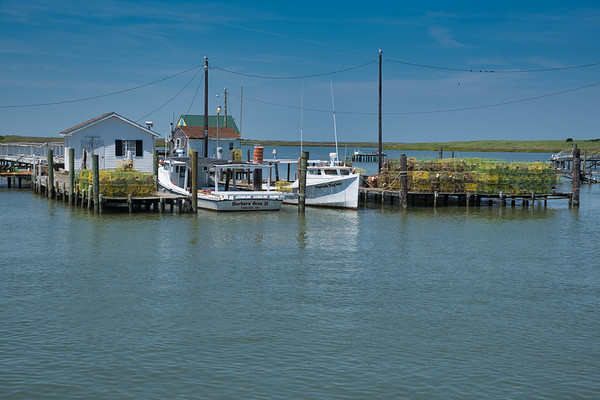 Most of Tangier’s economy depends on fishing and especially soft-shell crabs. Although this summer was a pretty good season, their catch is being negatively impacted by climate change.

Many beautiful homes on Tangier, some of which date to the colonial era, have been abandoned due both to the rise in the water level and as more younger people move away to find greater opportunities.

Large parts of the island are marsh land and that area is growing. I’ve read different estimates of when the island will become uninhabitable but none are very far off.

This sea wall was built to protect the island’s airport from rising waters. It will be very expensive, and ultimately useless, to construct similar defenses for the rest of the island. But that’s exactly what many local residents expect to happen, based on promises from the current president.4

More photos from my visit to Tangier can be seen in this gallery.

1. An article and video in the Atlantic calls the residents “Among the First Climate Refugees in the U.S.”.

2. In a long excerpt from a book about Tangier and its residents, Politico calls it “The Doomed Island That Loves Trump”.

3. The ferry from Reedville, VA leaves at 10am and normally departs Tangier at 2pm sharp. Our return trip that day was delayed to 2:30. Still not a long time but enough to marvel at the environment.