When I go to ISTE, I’m mostly looking for interesting and new-to-me ideas for using technology to enhance learning. For adults as well as kids. While you can do much of that inquiry online, there is something about being immersed live in the community that cannot be duplicated digitally.

At the same time I also make it a point to attend sessions by a small group of the same presenters, even if I pretty much know what they’re going to say. Because I also know they are people who will inspire me and jumpstart my thinking in unique ways. One of those people is Will Richardson.

During his ISTE talk, Will compared the very trendy concept of makers spaces with computer labs, saying that schools need a maker culture, not spaces. It was almost a throwaway line, a relatively small point in his talk but also one that got stuck in my warped little mind.

Wiil’s view of maker spaces as the new computer lab1An anachronism that should disappear but only seems to be reconfigured every few years with new devices. perfectly encapsulates the uneasy, slightly negative feelings I’ve had towards the maker space concept, as the chatter and activity around it has has grown over the past four or five years.

It’s not that I disapprove of the idea of kids as makers. I love it. That’s exactly what school should be. But that’s not how the concept is applied in most schools.

As happened with computing devices, someone’s idea of a “maker space” is set up in a corner of the library, stored in a vacant room, or assembled in a cart rolled between classrooms. With students performing pre-planned activities for a fixed period of time, before returning to their “real” work.

In most schools I’ve observed, maker space is a pull out program for students that we know will pass the spring tests. A reward for completing that real work. An option for kids before or after school, or during lunch. An elective for students with space in their schedule.

Maker space is usually whatever the local advocate says it is. I’m interested in robots, so we buy robot kits. The dollar store had a sale on Popsicle sticks, so we construct towers. The principal bought a 3D printer, so we better use it. (Until the filament runs out and we can’t afford to buy more.)

I’ve seen all of this in schools and more.

A school with a maker culture, however, is one in which students are encouraged to explore all aspects of “maker” that interest them. Music, writing, science, video, coding, drawing, cooking, and many, many more topics that may not even occur to adults who think of “school” in very traditional ways. Auto shop, wood shop, metal shop were maker spaces when I was a kid, all of which have largely been removed from schools in this area.

Once upon a time, all of this was part of a liberal education. Providing kids the opportunity to explore a wide variety of subjects during their K12 years. Making them aware of their options. Preparing them for life, not just for college. I know, it’s an ideal view of school. One that in the real world America of my youth was never perfectly implemented.

That’s exactly what a school built around a maker culture would be. Rather than being a reconfigured computer lab.

What School Should Be

In a great TEDx talk, Will Richardson gets at the heart of what school is and what it should be. Take 16 minutes to watch the whole thing2I would have embed the video in this post but the folks at TEDx WestVancouverED disabled that feature., but if you don’t have time (or YouTube is blocked in your school), this slide is a pretty good summary of the differences. 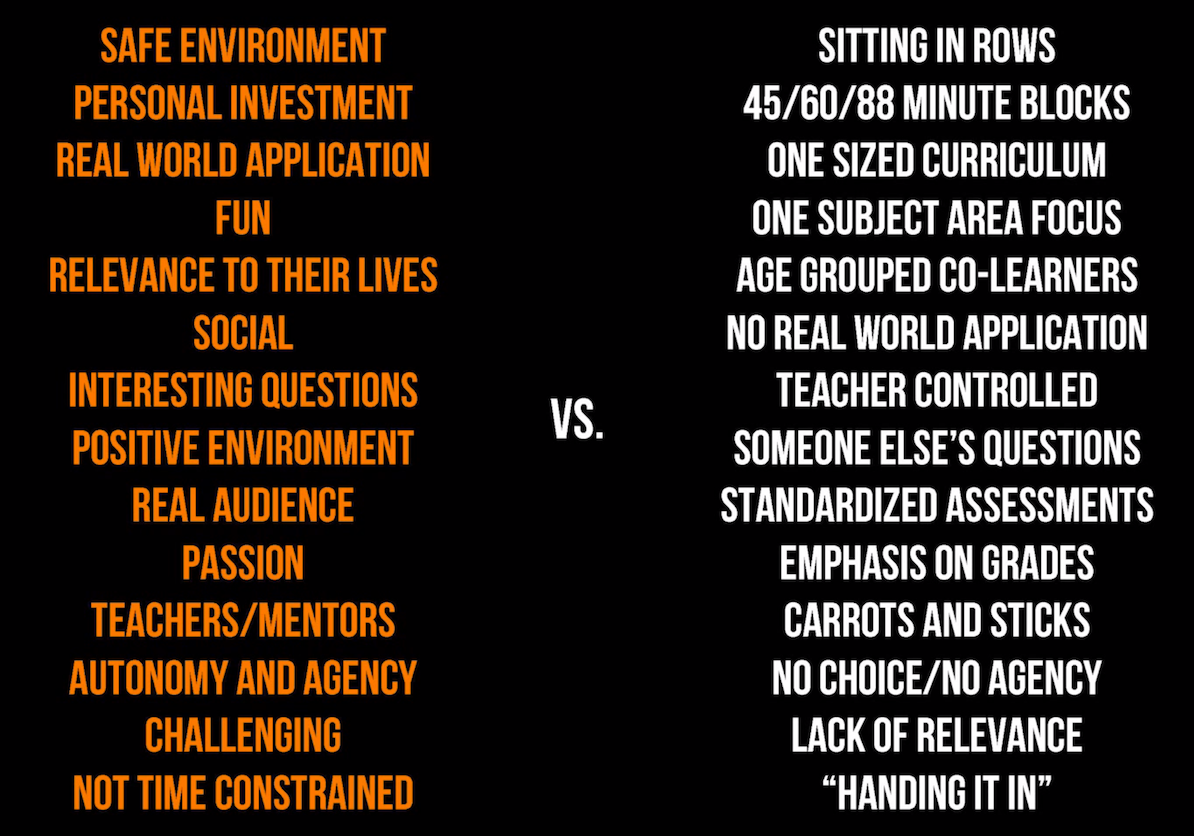 Those terms on the left side, or variations on those themes, have been included in speeches, reports and white papers from any number of education “reformers” since at least the turn of the century.

For the most part the list on the right side represents classrooms from the turn of the previous century. And is still what you’ll observe in almost every American school – public, private, charter – here in the 21st century.