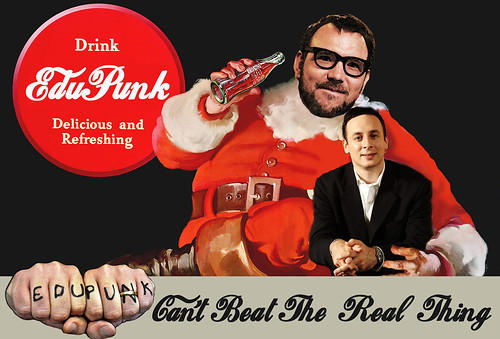 In the middle of March, the overly-large school district for which I used to work (aka Fairfax County, Virginia) abruptly decided to close (a day or two after the superintendent said they would not) because of the spreading pandemic, and essentially went into a three-week spring break. The plan was for students to continue the semester online following Easter, after teachers had time to plan for the transition.

The switch to virtual classrooms was a little bumpy. Or a big crap fest according to the local news media. You can read many of the details as documented in the Washington Post,1 but that reporting only really addresses the more recent events.

The stories in the paper place a lot of emphasis on Blackboard, the learning management system that was chosen to be the platform for delivering instruction. The short story is that they were overwhelmed with upwards of 150,000 users trying to use the site at roughly the same time, along with some high profile security issues.

However, the seeds of Fairfax’s issues with the abrupt and complete shift to online classes were actually planted nearly two decades ago. They are also far more related to people than with the technology.

It began not long after the turn of the century, when leadership in the department responsible for instruction, curriculum, and pedagogy decided they had little interest in how technology would be integrated into the classroom. Computers and software were nice, just not something they wanted to bother with.

So, the decision-making process was abdicated to leadership in the technology department, a division of the district run by people with almost no background in instruction, and little interest in learning the details of how instruction works. The result was that IT approved products and systems that would be easy for them to maintain, and most importantly, control.

We first signed a contract with Blackboard in 2005, driven by the growing number of teachers who were signing up for their free service and experimenting with the idea of online instruction. Forcing all of these “pioneers” into the official district installation brought control back to IT and, as a bonus, allowed them to boast that we were one of the first K12 districts to adopt an LMS.

The contract was renewed in 2010 and again in 2015.2 This despite the site having a clunky interface that was difficult for most teachers to navigate and features that were always several years behind even their own products. And the fact that the company had repeatedly failed to make promised upgrades to accommodate the overly-large number of potential users.

For those of us who knew something about the instructional uses of technology, it was obvious that Blackboard needed to be replaced. It became even clearer somewhere around that first renewal when IT decided to require every teacher in the system to establish an online course. The vast majority of teachers saw no benefit to their practice in using the system. They simply tossed up a few documents and called it a day.

By the time I left in 2015, I’d estimate that fewer than half of the district’s instructional staff regularly used Blackboard, “regularly” being generous. Most only opened their accounts to access the portal to instructional materials that was kluged into the interface in a misguided attempt to show greater use of the expensive albatross we were stuck with.

Flash forward to a few weeks ago and you have a very bad combination of ingredients. Most instructional staff with minimal training and little experience working with students in an online environment; a clunky system incapable of handling the sudden flood of new users; and an arrogant IT department unwilling to admit they might be over their heads.

There is much, much more to this story that didn’t make the Post or this now too-long rant. The fact is that most teachers in Fairfax, with the help of their instructional technology specialists, are finding ways around the technical issues and are making remarkable efforts to stay connected with their students.

But the bottom line to all this is that technology wasn’t the problem in Fairfax’s move-to-online-instruction fiasco. It was people in leadership positions who made the foolish decision to rely on one specific, very-flawed solution to a massively diverse problem.

It was a mistake some of us could have seen coming from years away.

The image is a very strange holiday-themed mashup featuring Michael Chasen, co-founder and former CEO of Blackboard. It was created by a friend, Tom Woodward, in 2008, is linked from his Flickr accounts, and is used here under a Creative Commons license. Tom was in on the Blackboard sucks movement early.

1. When I worked in Fairfax, one big, unwritten rule for administrators was to never get written up in the Post. The paper rarely put good news from the district in the analog version of the newspaper.

2. Full disclosure: In both cases, I was a member of the relatively large team that evaluated the various LMS products that were competing to replace Blackboard. I was not a part of the much smaller group that made the final decision. IT rarely listened to my opinion anyway. :)