The Fallacy of School Choice

With the new administration pushing the privatization of public schools, headed by a Secretary of Education even less qualified than me, you hear from a lot of advocates for “school choice”. 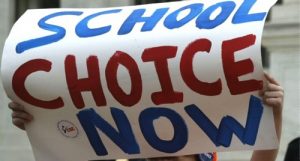 They tell you that if all parents had the option to send their children to any school of their choice – charter, private, or public – all would be well with American education. Or at least scores on the NAEP and PISA tests would skyrocket, which is about the only way most school reformers understand learning and student “achievement”.

The Secretary and her friends in the charter school industry maintain that picking a school should be like any other purchase in the free market. After all you have lots of options when it comes to buying a car and many places to buy one. Why not offer at least a few choices when it comes to something even more important?

There are some major issues with a “free market” system for something that should be a public good, more than enough for several long posts. However, the specific concept of “choosing” as school for a child includes a big problem I haven’t seen discussed much.

Unlike finding a new minivan, the vast majority of parents don’t have enough information about the complexities of school to make a real, informed choice. And many, if not most, don’t have the resources, expertise, or time to become sufficiently informed. That’s not a criticism of most parents. Unless you’re as rich as DeVos, parents don’t have a lot of time to spend on research.

But schools, private or not, also don’t make it easy to comparison shop. Some work very hard to hide any meaningful data on their programs, outcomes, and finances. Public schools have been known to fudge the numbers. And the information provided by most private schools and charters often comes in the form of marketing brochures. Material that’s more about recruiting than transparency.

In addition to having enough information is providing it in a form that can actually be compared. When you research that new car, most of the basic metrics have common units and language that can be lined up in columns. You also have some relatively independent organizations that test drive vehicles and speak a common language about the vehicles.

No one “test drives” schools. There are few common metrics between all schools. Much of the common language – world-class, mindset, high tech, innovation, STEM – is at best vaguely defined. Test scores can’t be compared because not all schools use the same evaluations and students in charters are often not required to take them. Even graduation rates are not measured in the same way.

So, the goal is to allow every parent in the US to decide where their children will receive the basic education that will impact the rest of their lives. How do we provide them with the necessary, relevant, and comparable data to do that? Something more than websites and flyers with pictures of happy kids and competent-looking teachers, mixed with important sounding educational jargon.

That’s a serious question. One that I rarely hear the advocates of school choice address. Because without sufficient, understandable information, how does anyone make a critical decision about something as important as a child’s education?

Hey, here’s a radical idea! How about if we spend more time and resources on improving pubic schools for all children everywhere in this country? That too is a serious question.