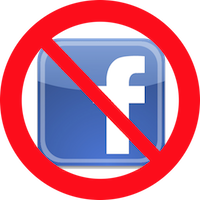 I do open the site once or twice a month, primarily to see new photos from friends and relatives, and to catch up on Bloom County (which includes the only civil discussion section on the internet).

Other than that, nothing. I haven’t posted anything to my timeline in several years, rarely leave comments, and certainly never click on anything – lest Facebook track me around the web.

As to why, read the words of a writer for The Guardian who explains what caused her to stop using Facebook, and why she’s very cautious about starting again after four years.

I didn’t make a conscious decision to leave Facebook. It was similar to when I stopped smoking: every other time I’d made a song and dance about quitting I had failed, but when one day I realised that it didn’t make me feel good it dawned on me that I wouldn’t be missing out.

But it’s the messiness of my home feed that reminds me why I left in the first place. I am perplexed by some of what Facebook now thinks is a good idea: inserting into my news feed all the happy birthday messages people I know have left on other people’s walls (why? what?). Much on the news feed is a cacophony of dullness and makes for a messy interface. This I haven’t missed and is why I suspect my head has felt at least a little clearer these past four years. Just one less screaming technological wail of attention to deal with.

I completely agree. The messiness of Facebook is just one factor that never made me feel good either.

Whenever I do open my account, the page seems to be overun with advertising, mixed with that “cacophony of dullness” resulting from a random stream of mostly meaningless stories. The result is that “screaming technological wail of attention”. A phrase I’ll have to remember.

Now, I’m not a technological hermit by any means. I spend a lot of time on Twitter, but I find that platform far easier to adapt to my needs, and much more useful. I regularly share my photographs on Flickr and elsewhere for anyone to view.1Although we’ll see if I stay depending on what Verizon decides to do with it following the purchase of Yahoo properties. And, of course, I’ve been ranting in this space for almost fourteen years, even if the potential audience is far below 2 billion people.

Not that anything in this particular rant matters anyway. With or without me, Facebook will likely keep growing, both in users and the profit from selling them to advertisers. Little ol’ me isn’t going to slow them down.

However, I’m picky. I want to have a little more control in my online life. And much less chaos.

That’s not too much to ask, is it?