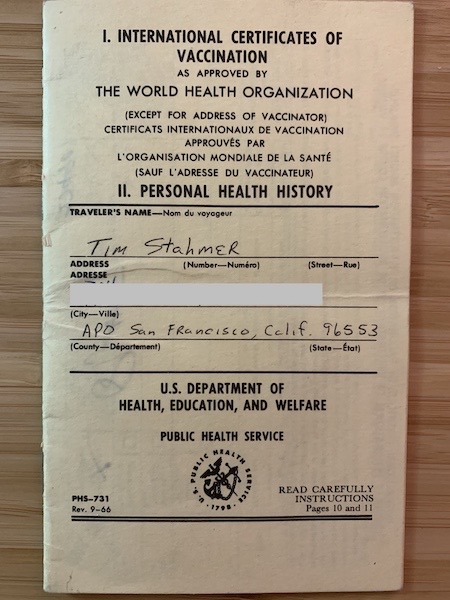 As I tentatively begin planning journeys outside the US for next year and beyond, it’s hard avoid seeing posts, tweets, and articles ranting about the evils of vaccine “passports”. Something about restricting your “freedom”.

Vaccine passports, which are being developed by the European Union, the state of New York, and others (public and private) are simply some kind of document, physical or digital, certifying that a person has recently been inoculated against highly contagious diseases.

However, those people who are paranoid about the idea of having to carry their shot record when traveling are either very young or have a short memory. It’s hardly a new concept.

Way back in 1970, my father was transferred to Hickam Air Force Base on the island of Oahu. Although Hawai’i had been a state for eleven years by that time, the military still classified the area as “overseas tropical”. Which meant that the whole family was required to visit the base infirmary to be vaccinated for yellow fever, typhoid, and diphtheria, plus a booster for smallpox.

As proof, we were issued a yellow booklet (mine is pictured above),1 approved by the World Health Organization, signed and stamped by the doctors who administered the shots. And we had to present it to someone at the airport before they would allow us on the plane.2 Same when returning to “the states”.

No big deal. I’m sure I didn’t care for actually getting the shots, but allowing someone at the gate to thumb through it was hardly an affront to my “liberty”. It was all part of the experience, and it allowed me access to another, possibly exotic, part of the world.

I still don’t like shots, but I get them. Because my doctor and other medical professionals say they’re important for both my health and the people around me.

And if I’m required to demonstrate that I’m doing everything possible to reduce the spread of deadly diseases in order to travel, bring on the vaccine passports.

1. The fact that our mailing address in Hawai’i was APO San Francisco (APO=Army Post Office) is another indicator of how not-American the state was considered at the time. At least by the US military.

2. I was also required to maintain my shot record during my short time serving in the Air Force and present it at the annual review. Another no big deal.