Where Did The Hype Go? 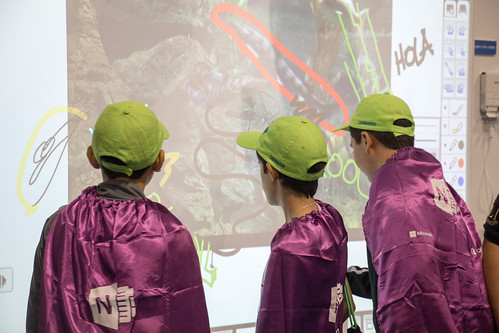 Good question, although if you look in most classrooms in this area, they’re still hanging on the wall. They aren’t necessarily being used, but at the price schools paid for those things, devices like IWBs don’t get thrown out until they cease functioning.

Anyway, Cuban goes through a short history of the devices in education before asking a few, very salient questions.

What Problems Do Interactive Whiteboards Intend To Solve?

Apart from the glitter of a new technology aimed at teaching and learning, district and school administrators saw IWBs as solving the ever-constant problems of student motivation, engagement, and academic achievement.

IWBs gave teacher total access to information on the Internet and new tools to expand their repertoire of lecture, whole group discussion, small group teaching, and students’ independent work, thereby enhancing existing teaching approaches. The theory was that IWBs, then, by engaging students would remedy partially or wholly those ever-constant problems faced in classrooms.

Putting aside the part about the boards providing “total access” to the internet (which could be accomplished in so many better ways), I almost understand the motivation/engagement aspect. A big, shiny piece of tech with the accompanying flashy software attracts a lot of attention in a classroom.

But in my experience over the first ten years of their existence in our overly-large school district, I saw little change in classroom pedagogy or management that resulted from the existence of an IWB in the room. And I always questioned the part about improving student achievement. That was a sales promise that came with little to no evidence.1

Later in the piece, Cuban asks “Do Interactive Whiteboards Work?”. Which, of course, requires someone to define what “working” would look like.

No matter how you do that, “research results, as one has come to expect in education, are decidedly mixed”. Cuban links to a half dozen articles about research into the use of IWBs, including the very positive and widely criticized study by Robert Marzano that was paid for by Promethean, one of the larger IWB vendors.2 All except for that one were “at best, ambivalent” on the matter of “working”.

So then we come to the final question, the one we started with “Why Do We Now Hear So Little Today about Interactive Whiteboards?”

As with other edtech “revolutions”, Cuban says one reason could be that the newness just wore off and the hype cycle moved on.

But he also speculates that the IWB just became another fixture supporting the traditional, “teacher-centered” classroom.

I would suggest another possible reason. It lacks much evidence, however, other than what I have observed, heard from teachers, and know about the history of classroom teaching. IWBs inherently reinforce teacher-centered instruction (e.g., lecture, demonstrations, frontal teaching) at a time when the rhetoric among educators and school practitioners is student-centered instruction (e.g., much student participation, collaboration, and student choice). The clash between rhetoric and practice often goes unspoken and seldom noticed. After all, teachers adapt innovations to their lessons once the tinsel wears thin on an innovation and for those teachers who swear by their IWB, it is another tool in their kit of ways of getting students to learn.

In the past two decades, we’ve talked a good game about “student-centered instruction”, but very few schools and teachers actually make it happen. I think Cuban may be right with that final assessment.

IWBs lost their hype by becoming a common and popular fixture in many classrooms. The devices faded into the background by reinforcing traditional teacher practice, while only adding more student-attention grabbing bling to the mix.

From my Flickr feed, the picture shows three boys (in their marketing capes and hats) doodling on an IWB in a vendor booth at an ISTE conference. Seems like a good use of the technology. :-)

1. I’ve ranted about the failed promise of IWBs many times in this space, if you care to read more.

2. My memory could be a little fuzzy, but I recall that Marzano actually recanted and apologized for the study a few years later.