You Are Not a “Math Person” 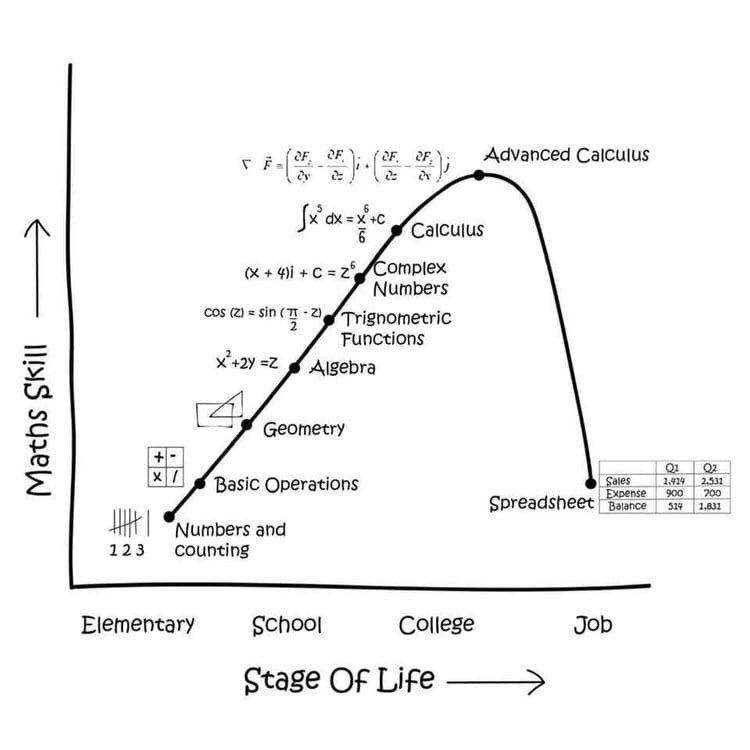 There is no such thing as a “math person”.

Many people have told me they were never good at math but that’s not true. No one is born “bad at math”. And, while some people develop an interest in numbers and logic (I did), no one is born as a math person.

The curriculum most students study during their time in K12 starts with helping them build a sense of numbers and how they relate to the world around them. Which is good because everyone needs those skills to be successful at life.

However, as students progress through school math instruction quickly deteriorates into lots of activities involving the manipulation of numbers. Mostly stuff a calculator app on your phone could handle while drawing very little battery power.

For the most part, math instruction at the elementary level is largely designed as a funnel. The goal is to slot students into the mathematics “college track” beginning in middle school for most students. A track that starts with Algebra 1 and terminates (literally and figuratively) with Calculus.

The dirty secret of all this is that very few adults use even a small portion of the math they study in high school, even if they attend college after graduation.

It’s also true that professions employing the mathematical topics taught in high school never use the same approach you were taught. The one where you are presented with a canned problem and expected to recall the correct set of algorithms needed to crank through the numbers (also provided, mostly) to produce one right answer.

In the real world, math is one tool that is pulled out of the box and mixed with others when needed to address the many different aspects of the problems being addressed. More often than not, the actual computations are done by computer, and the most complex issue faced by people is determining whether the results are accurate and relevant.

Oh, and those math problems found out in the non-school world almost never have one right answer, much less one that’s a simple number.

Over my years of teaching, I had many students who earned A’s in my classes and still didn’t like math. They had learned how to play the math game early in their academic careers and often didn’t retain much about what they “learned” when I spoke to them even a few years later.

Early on, I blamed my teaching skills for that lack of “stickiness”. Later, after gaining a better understanding, I realized there was far more to the case than what happened within the walls of my classroom. Although I know my approach to instruction was probably still a factor.

Anyway, before blaming yourself or the genetic make-up of your family for not excelling at math, take a closer look at the disconnect between the subject as you learned it in school and how it’s used in your life.

Maybe if your classes had spent more time on stuff like probability you might not be so quick to buy a lottery ticket. Or buy what someone is trying to feed you in the latest poll.

I’ve used the graphic above several times in rants on this topic, although I’m beginning to think the y-axis should be labeled “algorithmic complexity”, instead of math skills.