Last spring the Los Angeles County schools voted to buy an iPad for every child in their system. This fall they started handing them to students, confident that they were locked down and could only be used for the designated instructional purposes.

It took exactly one week for nearly 300 students at Roosevelt High School to hack through security so they could surf the Web on their new school-issued iPads, raising new concerns about a plan to distribute the devices to all students in the district.

I don’t know the details beyond what I’ve read on the LA Times site, but there are a couple aspects about this story that go beyond my original rant on this project.

First, it hardly rises to the level of “hacking” when all that was required was deleting the personal profile on the device. AndÂ I doubt 300 students discovered the process. More likely it was one or two who then spread the news.

But even worse than a few kids challenging a rather stupid attempt at “security” is the district leadership’s view of how they should be using a connected, powerful computing device. As little more than a very expensive means of delivering standard curriculum materials, stuff that’s probably little changed from the stuff currently on paper.

And that vision (or lack thereof) is driven home by their short term solution to the problem.

By Tuesday afternoon, L.A. Unified officials were weighing potential solutions. One would limit the tablets, when taken home, to curricular materials from the Pearson corporation, which are already installed. All other applications and Internet access would be turned off, according to a district “action plan.”

Or to put it another way, 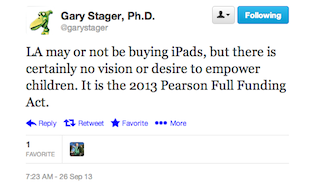 In the end, LA could have paid Amplify to provide heavily locked-down tablets with canned curriculum materials and few worries about empowering children. And done it for far cheaper.