This is one finding that is so obvious that even Obviousman would just ignore it. It seems that the level of customer service delivered by American companies is pretty bad. How bad? 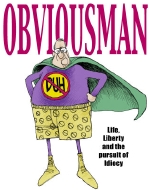 A current snapshot of consumer satisfaction by the University of Michigan Business School reveals a large group of unhappy campers. In its most recent American Customer Satisfaction Index, the average score for the specific issue of complaint handling is 57 (out of 100) for the 40 industries tracked by the index. "No one does a particularly good job in handling complaints," said David VanAmburg, managing director of the index, which measures consumer satisfaction with goods and services.

Even more disturbing, VanAmburg said, is that a closer look at 17 industries with enough data to measure satisfaction in great detail showed that 14 — or 82 percent — field complaints in such a way that they are driving customers away.

The American Customer Satisfaction Index for some odd reason doesn’t include cell phone companies. With them factored in, I’d bet the index would be a good ten points lower.

A few years ago, the superintendent of the overly large school system I work for declared that our theme for the school year would be "A Client Centered Education". The idea of central office improving service to the schools was a good one but the plan was largely a bust. Aside from the fact that most teachers and parents didn’t like being referred to as "clients", this bureacracy is too big to reform with just a few slogans and pretty posters. And, of course, the following year he gave us a new theme.