Science on a Sphere is a very cool room-sized system for animating planetary data on a giant globe. Like this view of the Earth with the oceans removed. 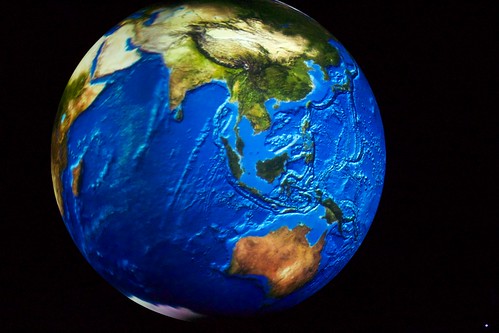 Ok, words and still pictures really don’t do it justice but some of us who visited James Madison University today for their Brainstorm 2014 ConferenceÂ 1Co-sponsored by the Virginia Society for Technology in Education got an in-depth backstage look at the system created by NOAA2National Oceanic and Atmospheric Administration for museums, science centers, and universities.

Too bad the installation is so expensive and requires a lot of space (at JMU it’s set up in half of the gym from a former high school.); this would be a great way to illustrate all kinds of science concepts for students at all levels. And it sounds as if programming for it is something high school students could learn.

Side note: I asked our hostess if they ever got any pushback from kids in the school groups when illustrating the effects of global warming or the way the surface of the Earth has changed over millions of years (not 6000 as preached by some creative storytellers).

Interesting that she said they don’t get any arguments on either topic from the elementary kids but do have some university students who are climate change deniers. I just hope none of them expect to be reputable scientists when they graduate.