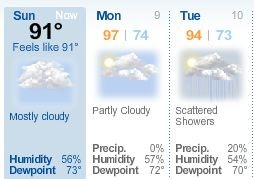 We normally don’t get this kind of crap weather until August.