Ok, the iPad was announced yesterday and, as far as I can tell, the world remains pretty much the same.

I’ve watched the video of the presentation, read some of what the geeky tech blogs have to say, and, at this point, I’m 80% sure I’ll be buying one when they go on sale.

I know, I know, the device has it’s shortcomings (oversized iPhone? so what?), there will soon be cheaper competitors, and Apple will probably release a new version with more features in time for the next holiday season. 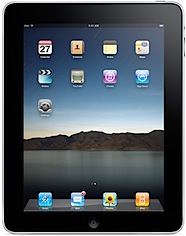 It still looks like a very cool device – and sometimes you just can’t explain the iWants. :-)

However, included with the many, many stories about Apple’s latest object of tech lust (including the front page of the Post!?) are some breathless predictions of it’s potential effect.

This tablet will save the newspaper industry! It will revolutionize electronic books!! The iPad will transform education!!!

As with any other new technology, it’s not the hardware and software that matters.

Putting a digital version of The New York Times on the iPad will not convince people to pay for it again unless they convince them of some compelling new value in that format.

In the case of education, nothing gets transformed if institutions latch on to it as a textbook replacement, a digital notebook, an expensive electronic replacement for a Trapper Keeper.

Change in how teachers teach and students learn will not flow from putting the same old curriculum materials on a tablet and then using it with the same teacher-directed lessons, primarily focused on preparing kids for standardized tests.

Mobile communications devices such as the iPad will only have an impact if they become individual learning platforms that regularly change to meet the needs of the person carrying it.

Anything less, is simply one more gadget for the school toy box.