We Are Not Amused 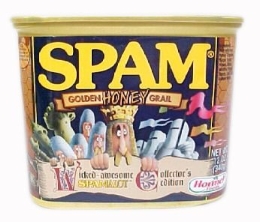 The adverts are witty; the posters hilarious and Michael Palin’s Finnish programme notes a delight. The show itself? Well that’s so-so, alternately laugh-out-loud silly and a teeny bit tedious…

The plethora of fart jokes combined with references to musical theatre and the pastiche score makes it look as if its target audience are 11-year-old boys with an encyclopedic knowledge of the musicals of Andrew Lloyd Webber.

That’s from the Guardian’s review of Monty Python’s Spamalot, currently playing in London.

We saw the play when it came through DC last year and I remember it being hilarious and a whole lot of fun.

I’m no expert on Webber’s work but I suppose the rest of the writer’s description is pretty close. :-)