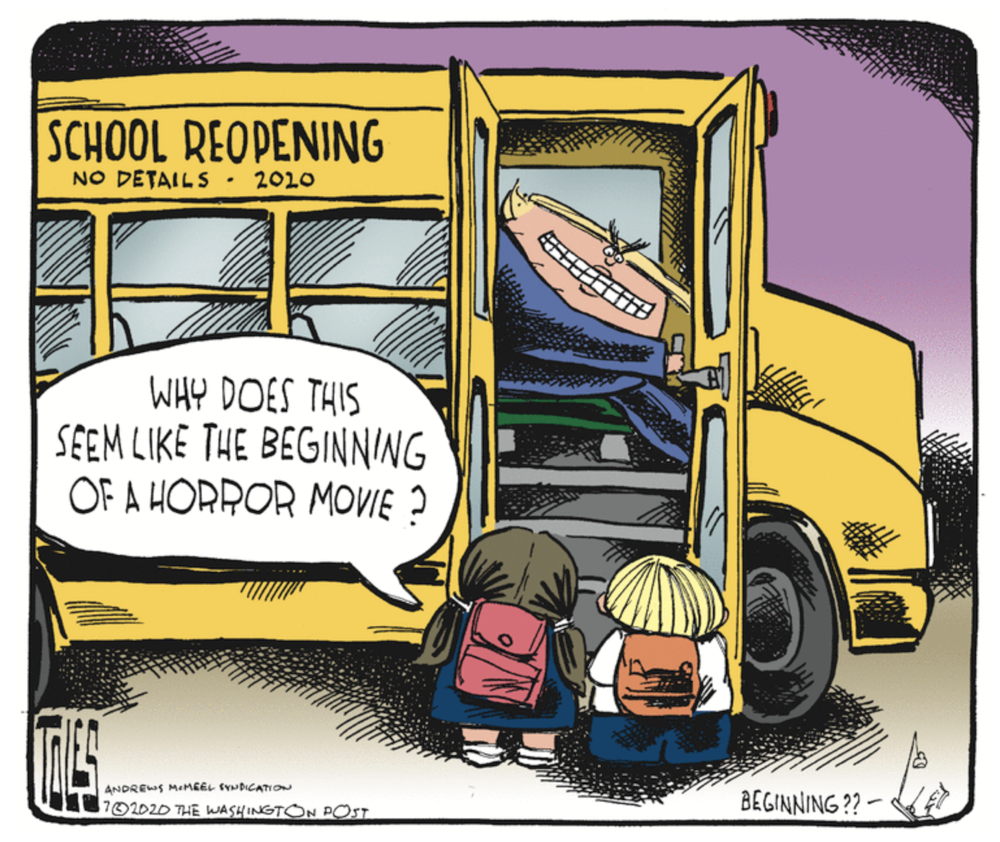 Lots of politicians, pundits, and other experts, with minimal uncertainty, have declared that kids must go back to school this fall. I guess that whole online schooling we tried last spring didn’t work for them.1

About three weeks ago, the superintendent for our overly-large school district announced their plans for opening, a compromise between full in-person attendance and being fully online. Parents have been given the choice of their children being in the building two days a week, completing the rest of their work from home, or having their instruction completely online.

Teachers would also be given the same options, although, from what I’ve read and heard, administrators made it clear that they might not be able to honor all the choices.

As with most compromises, the many different constituencies immediately found something they didn’t like about the plan. The three organizations representing teachers2 were among the loudest, telling their members to all select the all-online option.

All of which is completely understandable since it generated far more questions than answers, even nearly a month later. And, as you might expect, the specifics keep changing.

For one thing, the school board moved the first day of school ahead two weeks to the day after Labor Day. Administrators also bumped the date by which parents and teachers had to make their decision, from last Friday to this coming Wednesday.

To complicate everything even more, in the past few days Fairfax’s plans were given a big national spotlight when the Secretary of Education3 offered her thoughts, all of them negative, and the district was featured in reports on CNN and other media. Plus lots of sometimes conflicting advice from medical organizations and other experts.

So, if I were running the overly-large school district,4 and the school board told me I had to plan for at least some students in the buildings, here’s what I would do.

Anyway, here we are with fall fast approaching and plenty of uncertainty about… well, pretty much everything, starting with the course of the pandemic itself. Jen has a good post with some questions she’s been considering, and there are many more. I don’t envy my many friends and former colleagues who also have difficult issues to face, in and out of their jobs, probably for at least the rest of the year.

I’m still pretty sure the new school year will start sometime in September but beyond that, everything is up in the air.

Welcome to the new reality, for schools and everyone else.

The illustration is by Tom Toles, long time editorial cartoonist for The Washington Post. It pretty well sums up the current situation, don’t ya think?

1. Many more thoughts on that are coming.

2. Officially, the three groups are not “unions” since the state of Virginia does not allow public employees to be represented by unions. That may be changing soon.

3. She who must not be named. With any luck, she will be out of the job next January.

4. Something no one, including me, would ever want!