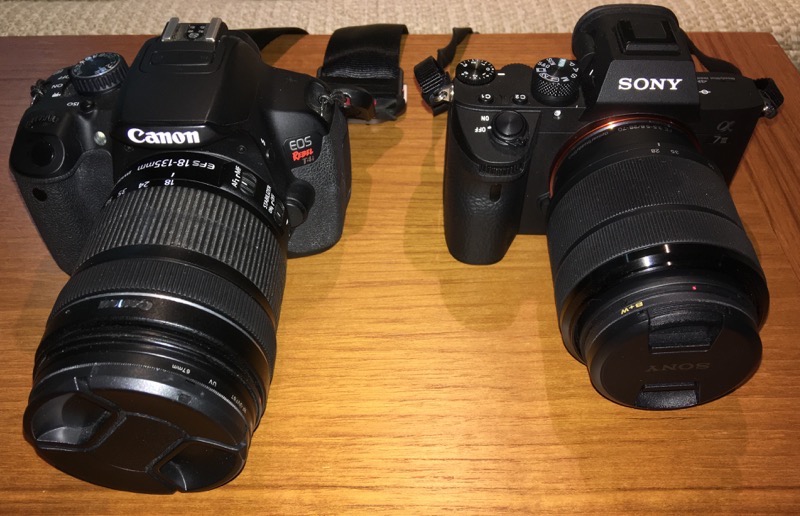 This post is long and rather geeky. If you have no interest in interchangeable lens cameras (ILC) and/or my process of buying a new one, it’s time to move to the next item in your RSS feed.

As you may have noticed from the photo-related posts around here, and especially if you have followed the link to my photo site, I make a lot of pictures. If you dug a little deeper, you would find that most of them were taken with a DSLR (digital single lens reflex) camera. I also use a smartphone camera, of course, but most often those wind up on Twitter, Flickr, and other sharing sites with no processing.

My current camera1 is now more than six years old, which, considering it’s been well-used on a dozen major trips, lots of shorter ones, and plenty of local photowalks, is getting up there in age. When I bought it, this model was considered “entry-level” in the world of ILC cameras, as was my previous DSLR and which I used for seven years.

So, I’m shopping for a new camera, a not-at-all simple process as well as a potentially expensive investment.

One complicating factor is that the technology has made some major advancements since I last did any serious camera research. Another is that I’m ready to move up a category, to something that might be considered “intermediate”. And that means more complex options.

However, the biggest issue I’m dealing with are the titanic developments in mirrorless technology coming from camera companies. Mirrorless will almost certainly become the standard for ILCs in the future, but we are currently near the beginning of that shift. Although the basics of shooting with a mirrorless camera aren’t really different, there are still some key differences between them and traditional DSLRs. And some important features still lag behind.2

All of this is why I rented a mirrorless camera last week and did a lot of shooting with it.3 Renting gave me a relatively inexpensive opportunity to play with the new technology, along with experience with the new operating system of a different camera brand.4 Plus a whole lot of buttons, dials, and joystick, all of which I couldn’t possibly learn in just a few days. But it was fun trying.

Of course, everything above is just about the camera. Buying an ILC system also means there are new lenses to consider, lenses that can also be very expensive. Although, I have friends who are really into camera equipment and own four or five different pieces of glass, in addition to a couple of bodies, my needs and wants are simpler. I will start with just one general purpose “travel” zoom lens and maybe add a second “prime” lens later.

Anyway, the bottom line to this long rambling post is that I won’t be buying anything right away. My current camera still has some good life in it, and budgeting for a whole new system will require some additional savings.

But the big unknown in my decision-making process is that the industry has not heard from the two big guys in ILCs. Canon and Nikon have not yet released “serious” mirrorless camera systems. They seem to be close. Both are expected to make some big announcements about their new equipment very soon, possibly at Photokina, the huge international photography show in September. The new systems aren’t expected to be widely available until next year, but knowing something about their plans will be good.

In the meantime, I’ll do more research, keep adding to my piggy bank, and continue making many more pictures with the cameras I have.

The common wisdom, of course, is that the best camera is the one you have with you. And that it’s not the equipment that makes great images, it’s the photographer.

However, advanced technology and understanding how to make the best use of it can make even better photographs possible.

Thanks for reading to the end of this rant. If you have any thoughts or experience to contribute to my search for a new ILC, I’d love to hear them. Or if you could benefit from what I’ve learned, I’m happy to help. Either way, please leave a comment or tweet at me.

1. The one on the left in the photo is my Canon Digital Rebel T4i. It was released in June, 2012 and I bought it not long after in advance of a big trip. The camera was unique at the time for having a touch screen, something that is now common on most ILC, but was by no means state of the art. BTW, no irony in the fact the picture was taken with an iPhone.

2. If you’re interested in digging deeper into the differences, this post from Tom’s Guide is a good place to start.

3. The one on the right is the rental, a Sony A7 III. That model was released in April of this year and is considered one of the best intermediate mirrorless cameras available right now. A few photos from experimenting with this camera are here. More to come.

4. Unlike computers, every camera company has their own OS. Like computers, all of them are very similar but just different enough to add another layer of difficulty when moving to a new camera.