Just to give you an idea of how big the National Educational Computing Conference (NECC) is, the picture below at the left is the view from half way back in the keynote hall last night. I have no idea how many people are registered but I’d bet it’s at least 10,000. The first picture shows the "pre-keynote" entertainment, a fiddler who looked like she was barely out of her teens and a close-to-50 guitarist nicknamed "Sugar Daddy". Feel free to make your own interpretation of that relationship but remember this is New Orleans. 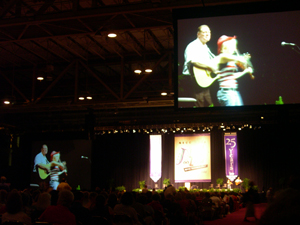 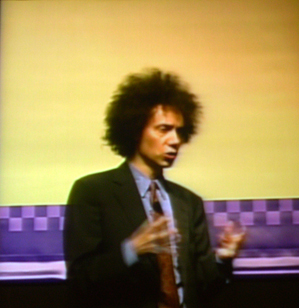 The keynote itself was done by Malcolm Gladwell, author of the book The Tipping Point. While much of his material came from the book, he still gave a very interesting talk. It’s a tough job keeping the interest of that many people in such a huge hall. His main focus was about change – both understanding how it happens and how to nudge it in the direction you want it to go – which was a very appropriate topic for this audience.

On a more superficial note, Gladwell looked a whole lot different than his picture on the book jacket. Instead of the bookish/lawyer look in that shot, at his talk he was channeling a combination of Kramer/Yahoo Serious. No matter, he still gave a good talk.

Every year after the keynote, NECC has a reception for all the attendees. Normally, it’s crowded but manageable, generally pretty nice – and the food usually lasts long enough for everyone to get some. This year it was a mess. The reception was at an aquarium near the conference center and it was obvious that no one did any math to figure out how many people could fit into the given space. I left after about a half hour, at which point they had closed the doors to the aquarium so they could allow people only after other groups left. Not good planning.