For the final 3-2-1 of 2016, here are three books, two audio books, and one movie you may want to consider enjoying during the coming year.

Three books worth a space on your reading list.

The Innovator’s Mindset by George Couros.  George is very much an advocate for empowering students and this book is a wonderfully positive collection of ideas for making that happen. It include many great suggestions that could and should be used immediately. This is one book that should be read with a group of other educators. (about 4 hours, 16 minutes)

Weapons of Math Destruction by Cathy O’Neil. Many decisions made by corporations and governments, such as who gets a loan or who is paroled from prison, are based on mathematical models that are poorly understood, even by the people who create them. This book is especially for those who are not “math people” and I’ll have more posts about it later. (about 5 hours, 26 minutes)

Education Outrage by Roger Schank. Few people do outrage better than Schank but, as you’ll find in this book, there is much to be upset about in the American system of education. This is a collection of Schank’s essays that will challenge some (maybe many) of your beliefs about what school is and could be. Share the book with your local school leaders. (about 5 hours, 57 minutes)

Two audiobooks for your commute.

Medium Raw written and read by Anthony Bourdain. Although he’s a chef by training, Bourdain’s television is all about travel and exploring other cultures as wide ranging as Vietnam and New Jersey. This is the story of those travels, mixed with a strong critique of restaurant trends and food television. Be warned, he occasionally uses bad language. (9 hours)

Me of Little Faith written and read by Lewis Black. If you have seen or heard Black’s stand-up work, you might think this is just his very caustic humor applied to religion. You would be wrong. This is a very thoughtful, and very funny, philosophical treatise in which he asks many good questions, and arrives at at least some good answers. Be warned, Black also uses some bad language. (5 hours, 50 minutes)

One movie to watch when you have time

The Big Short. This film was released at the end of 2015 and probably didn’t get a big audience. However, it’s a very thoughtful, surprisingly entertaining story about the housing crash of 2008, and bitingly very funny as well. Based on the book by Michael Lewis and featuring great performances by Steve Carell and Christian Bale. (2 hours, 10 minutes; on Netflix)

Over the break I read an interesting book about the very different way one company functions. “A Year Without Pants: WordPress.com and the future of work” is the story of the author’s time at Automattic, which runs WordPress.com, and does so with almost all their employees living and working in different parts of the world.

It’s an innovative way to run a business* and this thought about innovation by the author got stuck in my head.

The fundamental mistake companies that talk about innovation make is keeping barriers to entry high. They make it hard to even try out ideas, blind to how much experimentation you need to sort the good ideas from the bad.

We in education also talk a lot about innovation – both students learning to be innovative and teachers using innovative techniques to improve student achievement. We just never seem to get past the talking stage.

As part of the same theme, the author also observes that for this company “the big cultural bet wasn’t on process but on people”.

Educational organizations, like our overly-large school district, make a fundamental mistake in emphasizing the processes (rules and regulations that must be followed) over trusting people, something that discourages the kind of experimentation that leads to innovation.

No great insights. Just a couple of things to think about for the new year.

* The idea of having teams work remotely is one that seems to be spreading, even in many established companies. I’m in the middle of a book on this topic called Remote: Office Not Required, written by the founder of 37 Signals which also has most of it’s employees working from wherever they want.

Going Against The Rules

Although it was published three years ago, I’m finally getting around to reading Brain Rules by John Medina.

A combination of the book being highly recommended by several friends, Amazon selling the Kindle edition for only three bucks, and Medina being the opening keynote speaker at the ISTE conference later this month.

Anyway, I’m still in the very early parts of the book but I thought this quote from the introduction was worth passing along.

Certainly something to remember as I read on.

When Amazon first released the Kindle late in 2007, it was supposed to save the publishing industry by having us all reading everything from periodicals to textbooks on them. Â A few years later, that claim was made for the iPad.

Instead of physically delivering information on paper, these and the many other “coming soon” tablet devices would provide the material, with enhancements, in an easily distributed digital format.

Of course, I’ve been around long enough to remember when similar statements were made for laptops and before them personal computers. Anyone remember the paperless office? Anyone work in one?

While it certainly hasn’t yet replaced paper in my life*, I’ve been making a concerted effort to read more material on my iPad since it arrived six months ago.

That effort would be going much better if it wasn’t for a few obstacles placed in the way by someone. Apple? The app makers? Publishers?

The two most visible reading apps are Apple’s iBook and Amazon’s Kindle, and as I mentioned in an earlier post, I’ve only paid for a couple of ebooks due to the rather obstructionist DRM attached to most files.

Another annoying functionality road block is that neither app will allow me to copy a selection of text and paste it into an email or blog post, again limiting the usefulness of the format.

Sure, I can’t do copy and paste with an analog publication either, but wasn’t switching to a digital format supposed to make the material more useful than paper could? I seem to remember some visionary making that promise.

Anyway, if I had to make a choice between the two, iBook is the better reading app, both in terms of it’s features and the fact that it’s possible to add material other than what you buy from the attached store, a feature that’s not easily available with the Kindle app.

If you’re buying books, on the other hand, Kindle has the advantage since their store features a much bigger selection, slightly lower prices, and the ability to sync your digital files on multiple instances of the app (computer, phone, iPad, Kindle).

However, the reading app I use most often, and the one with the best overall functionality, is GoodReader.

Although sold (it’s only 99 cents) as a pdf reader, this app is a whole lot more.Â I get way too much stuff as Word documents and GoodReader will let me view (but not edit) them as well, generally doing a great job of retaining the original format.

ï»¿The app also makes it very easy to copy materials from any computer over a wifi connection, download directly from web URLs, and get files from online storage services like Dropbox or Apple’s Mobile Me.

And the best will be getting better since the GoodReader developers say that they will be adding pdf annotations in the next version.

As to the growing collection of other iPad newspaper/magazine replacements, I’ve found very few worth raving about.

*ï»¿For some reason, there seems to be more paper, not less, although that might be due to heightened awareness of how much stuff is needlessly printed.

Yesterday at the Building Learning Communities conference, one of the speakers offered up an interesting statistic.

75% of college graduates never read another book in their lifetime. 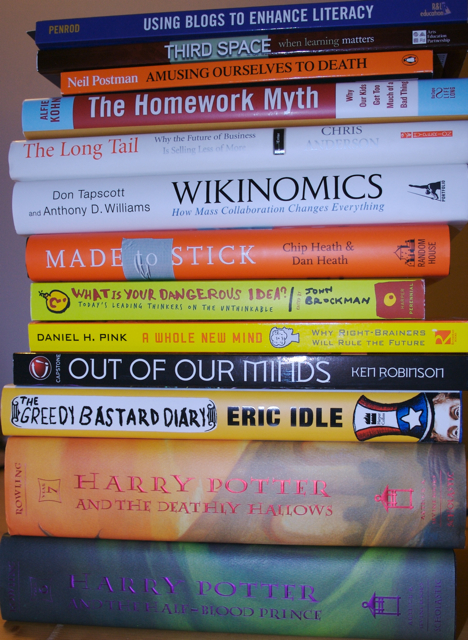 That’s an incredible statement, although it must be true since he put it on a slide projected on a big screen in front of nearly a thousand people.

Anyway, it’s also the kind of number that just didn’t sit well with my crap detector.

A little bit of Googling turned up similar statements (like the one in this collection of book stats) with different (smaller) numbers.

And the speaker did qualify his statement with something about that 75% including people who started reading books but never completed them.

Still, three quarters of the college educated population not reading even one book after graduation strikes me as awfully high.

Did the researchers include audio books? Books parents read to their kids? Graphic novels?*

As with the results of so many polls, surveys, and studies, you really can’t understand the results without knowing the source and the method used to assemble the numbers.

However, we have a large part of the population in the US (and possibly elsewhere in the world) who often accept the statistical numbers handed to them almost daily as fact.

Unless, of course, they come into major conflict with their own beliefs. And even then, they don’t question the numbers as much as they outright reject them.

Wherever the 75% number came from (and I have no doubt some pollster somewhere did get it), it’s just one more example of why we need to do a better job of teaching students to understand probability and statistics before they become adults.

After all, they need to know that 67% percent of all statistics are simply made up. Right? :-)

[The picture is of some books from my bookshelf. And yes I’ve read them all since college. Well… except for Harry Potter #7.]

*Don’t laugh, some of them have very complex stories!