The End of the Universe

Come this Wednesday, pop some popcorn and pull up a computer. You can watch the world end, live via the interwebs.

On that day, the European Organization for Nuclear Research, also know as CERN (derived from the original French name), is planning to flip the switch on the Large Hadron Collider, an immense physics project that some claim will create a black hole that swallows the Earth.

CERN will offer a live webcast of the event for your viewing pleasure.

You can bet the folks at Milliway’s will be watching. :-)

The Beauty of Physics

While there are a few who claim that the Large Hadron Collider at CERN in Switzerland could open up a black hole and swallow the Earth, most people in the world have never heard of it. 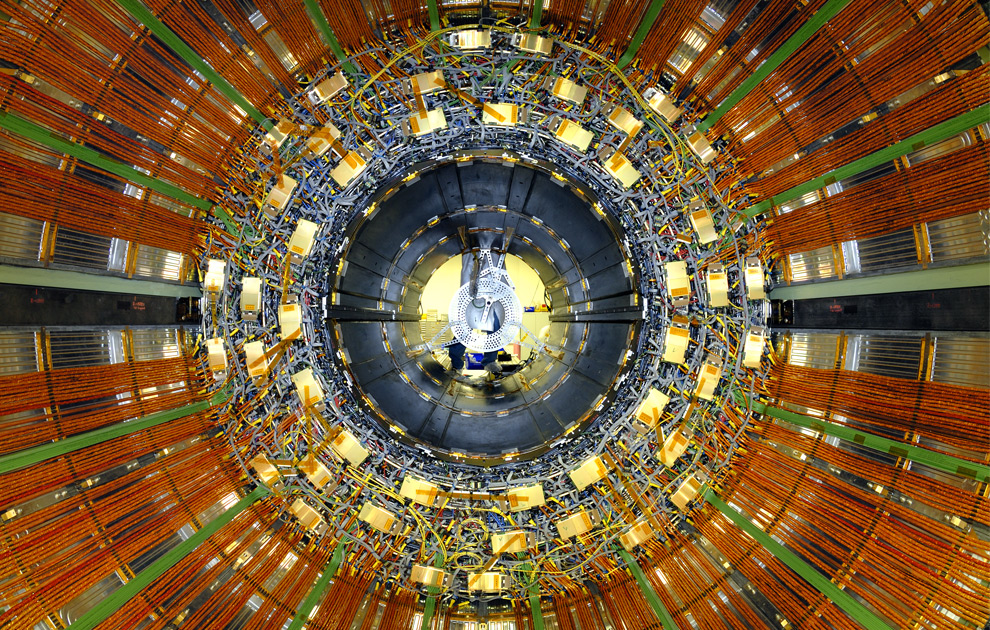 However, this collection of photographs offers a wonderful view into how this incredibly huge science project was constructed.

The pictures also make the device that will bring about the end of the world look downright beautiful.

All Science is Either Physics or Stamp Collecting

Last month I ranted about a teacher raising the possibility of the world being swallowed by a black hole created by the Large Hadron Collider at CERN in Europe.

However, with my last physics class more than a few years back, I didn’t have a good grasp of what the project is supposed to do much less why someone might be afraid of it on a cosmic level.

After watching the TED talk by Brian Cox, a “rock star physicist”, I have a somewhat better understanding of the science behind the Collider.

Actually, I had to watch it three times to reach that point. :-)

But I find the concepts fascinating. And the scale of the theories being investigated at CERN certainly add some humbling context to the everyday routine of life.

BTW, you’ll have to watch the video to understand where the title of this post came from.

Two men in Hawaii are suing to block the start up of the Large Hadron Collider recently constructed by CERN, the European Organization for Nuclear Research.

They’re concerned that the physics research complex will create a miniature black hole that will grow to suck in the Earth and everything in the vicinity.

Sure that all sounds like the plot for a made-for-Sci-Fi-Channel movie, but he’s serious. And this is all about very theoretical physics, which means concepts that are pretty hard to prove one way or the other.

But the part of this story that grabbed my attention is that one of the men is an elementary school teacher with a background that’s much more colorful than most teachers I know.

Wagner is, in fact, an expert in many fields. In his first degree at Berkeley he majored in biology and minored in physics. He then attended law school for three years, and later worked in nuclear medicine and health physics before becoming a grade-school teacher. He also founded the World Botanical Gardens in Umauma, Hawaii, and is now embroiled in a bitter legal battle with the Gardens board. According to the Hawaii Tribune-Herald, he and his wife were indicted last month by a grand jury on counts of identity theft and attempted theft relating to an alleged attempt to obtain $340,000 from the gardens company.

Ok, so maybe all that hurts his credibility a little.

However, the real science behind this story is fascinating, if not particularly well established. In addition, CERN is one of those semi-mythical organizations to which is attributed all kinds of scary practices.

In real life, it’s where Tim-Berners Lee created the World Wide Web while in fiction it’s where the bad guys played with anti-matter in Dan Brown’s Da Vinci Code prequel, Angels and Demons.

So, what will happen when the scientists working “deep beneath the Franco-Swiss countryside” flip the switch on the LHC?

Well, at least the black hole will swallow Europe first. :-)