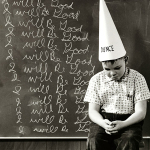 Speaking of improving teacher quality, the US Department of EducationÂ recently proposed new standards for teacher preparation programs. And if you were wondering ifÂ Arne and friendsÂ would try to tie teacher prepÂ toÂ standardized tests in some way, of course they would.

Under the plan, the federal government would require states to issue report cards for teacher preparation programs within their borders, including those at public universities and private colleges, as well as alternative programs such as those run by school districts and nonprofits such as Teach for America.

The rating systems, which would need approval by the Education Department, would for the first time consider how teacher candidates perform after graduation: whether they land jobs in their subject field, how long they stay and how their students perform on standardized tests and other measures of academic achievement. [emphasis mine]

I guessÂ theÂ colleges rated “effective” or “exceptional” will be the ones that do the best job of helping prospective teachers learn innovative test prep techniques.

Well, I suppose including alternative prep programs like TFA is a positive. Right?

For a more onÂ this stupid idea of teacher preparation programs having a direct and actionable effect on student test scores, read this fromÂ out there in lawyer-land.

Move Along… Nothing New Here

Arne Duncan, nominee to be Secretary of Education, had his confirmation hearing before a Senate committee yesterday.

So, what did the future leader of American education have to say?

He laid out a thoroughly pragmatic agenda, vowing “to scale up what works” to raise student achievement. He said the Obama administration intended to expand early childhood programs, encourage charter schools, improve teacher training and recruitment, reduce the high school dropout rate and increase college access. He called education a moral obligation, an economic imperative and “the civil rights issue of our generation.”

“We must do dramatically better. We must continue to innovate,” Duncan said. “We must build upon what works. We must stop doing what doesn’t work. And we have to continue to challenge the status quo.”

Sorry, but the agenda he outlined for the panel contains very little innovation and sounds exactly like the status quo.

We are at a point in American education where “pragmatic” is just not good enough.