What Doesn’t Work In Education Reporting 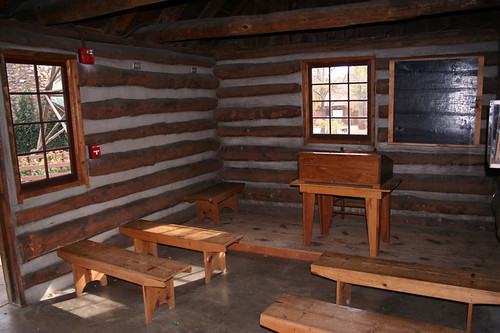 1The first school house built in the Arizona territory, around 1867. It’s been restored and sits near a museum in Prescott. Creative Commons licensed by-nc-sa

Rather than asking what works in education, NPR asked “education researcher John Hattie” about ideas that don’t work. His answers are not based on his own work but on a review of “more than 1,000 ‘meta-analyses’”, whatever that is.

Anyway, I wish the writer had started by asking Mr. Hattie what he means by “works”. Of course, I know the answer. Works means improving scores on standardized tests, even though his number two non-working solution is standardized testing.

Having said that, his final item, in which he says the US spends too much money on public education, is based on the fact that other countries spend much less while their students score higher than American kids on an international standardized test (the PISA).

He also says that smaller class sizes don’t work because countries like Japan and Korea have relatively large classes and are “high performing”, again on those standardized tests.

It’s too bad NPR just transcribed the executive summary of Hattie’s paper, instead doing some research of their own and asking some informed questions.

The worst part about stories like this is the failure to recognize that there are major differences between American society and our approach to education with those of other countries. Start with the fact that, instead of national education goals, we have 51 educational policies, plus around 31,000 local school boards.

Then review the level of public support for public education in the US compared to Finland, Japan, and the rest. How many of their government leaders are working hard to demonize teachers and privatize schools?

Finally, look at the societal support systems for children in each country, especially rankings of child poverty rates (anywhere from 20% to 33% of all children, depending on the definition of “poverty”). I’ll bet “making America great again” has nothing to do with improving those dismal statistics.

And anyone who says poverty has nothing to do with learning, has never tried to teach math to a class of hungry middle school students.