In analog newspapers, the space above the fold on the front page is considered very valuable. That’s where editors place the stories they consider most important, or at least the ones that might catch the eye of someone looking over the choices on newsstands. 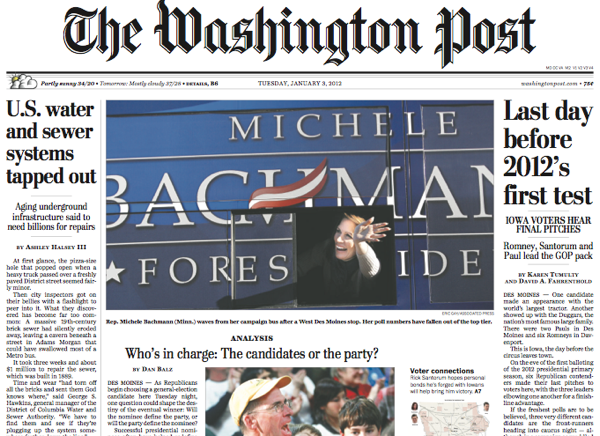 On the front page of yesterday’s Washington Post, 1/6th of that above-the-fold space was used to begin a story about how our water and sewage systems are falling apart and will require billions of dollars to fix.

The other 5/6th was taken up with pictures and stories about a group of people competing to lead this country, all of whom want to slash funding for even the most basic upgrades to the public infrastructure.

Same for roads, schools, energy, air traffic control, ports, and pretty much everything other than the military, and walls to keep people who don’t look like them out of the country.

Actually, most of those candidates for president would love to sell just everything off to the highest bidder (or to no-bid contributors if they can get away with it).

However, that above-the-fold space in the Post is also an example of how the news media covers the electoral process.

One-sixth (if that) on important issues, ones that actually affect the quality of life in this country, and five-sixths on the horse race of the election, the gossip, the manufactured controversies, arguing over the stupid, out-of-context, and irrelevant sound bites.

It’s going to be a long election year, and it’s clear the candidates and the reporters who cover them will be spending most of their time on trivial crap instead of educating the electorate.