Area 51, the top secret military base in the Nevada desert, is the stuff of conspiracies and legends. And, yes, it does exist. While there’s nothing about space aliens and their crashed spaceships, the real story of how the myth developed is still an interesting read. (about 6 minutes)

Although their animation technology is amazing, Pixar’s greatest skills lie in telling engaging and entertaining stories. One of their storyboard artists has been tweeting for years about that process and a graphic artist has put together 22 of the best ideas into a slideshow that includes some great inspiration for your story telling students. (about 10 minutes)

The US is facing a major shortage of qualified teachers in the next decade, and I don’t think the reasons are difficult to determine. But for some great insight into the problem, read this story about one talented science teacher who is planning to exit the profession because “US schools are broken”. (about 14 minutes)

We walk into a room, flip a switch, and expect that we will have light. It wasn’t always so, of course, and for most human history “getting light was a huge hassle”. That history of light parallels economic growth in the world and it’s an interesting story. (20:29)

One summer night in 1979, at a Chicago stadium, disco died. Or at least that’s the verdict of many cultural historians. A new podcast called Undone examines events only to find that they “were actually the beginning of something else”. This first episode is an entertaining story about how disco actually got wrapped into many other musical styles. (39:20)

One video to watch when you have time

Stephen Johnson writes about innovation, both where it comes from and where it leads. In an unusual video from the TED people (no lectures here), he uses stop motion animation to illustrate the idea that innovations like the computer come as much from people playing around as they do from necessity. Maybe more from play. “You’ll find the future wherever people are having the most fun.” (7:25)

David Letterman always had a certain intelligence to his goofy sense of humor, and aspects of that personality shine in this profile about his life in retirement (that creepy beard!) and his work on a series about the global effects of climate change. Maybe you need to be a baby boomer to fully appreciate him, but I’ve been a fan of Letterman after finding his work in college. (about 11 minutes)

But what if I don’t want to be a baby boomer? What if someone doesn’t feel a part of the group into which they’ve been sorted by demographers? You can be a Perennial. A new grouping one writer has created, based “on shared values and passions” instead of the “faux constructs behind an age-based system of classification”. It’s a nice idea. We’ll see if anyone else joins. (about 3 minutes)

We are told self-driving cars are well on their way. But before everyone jumps into one, one writer wants us to take a close look at the computer controlled systems we already have. For example, almost all commercial airplanes are being mostly flown by computers and mistakes can happen. “The rarer the exception gets, as with fly-by-wire, the less gracefully we are likely to deal with it”. Don’t read this during your next flight, but do read it. (about 21 minutes)

The Sporkful is an odd little podcast about food, but it’s not about cooking. The segments explore how food and the activity of eating reflects American society and culture. A great example is the first of a four part series on the subtle, and not so subtle, racial and cultural signals restaurants put out “that tell you what kind of place it is, and whether it’s for you”. (41:31)

Many supermarkets and other stores offer self-checkout registers these days and more are adding the option every day (I hate the ones at the local hardware store). The history of it’s invention is an interesting story, created by a Canadian doctor. Listen to this Planet Money segment for that and to find out why grocery store checkout still sucks. (20:27)

Pixar has created some of the best movies of the past twenty years. Not best animated movies. Best movies. Period. A great example of the powerful storytelling nurtured in that environment is this incredibly moving short film created by two Pixar artists in their spare time. I wish my spare time was half as creative. (6:45) [Note: the site says this film will be available for a “limited time”, although it doesn’t say how long that is.]

I’ve always loved the movies and shorts produced by the people at Pixar1Maybe not so much the Cars films., but there’s also a lot to admire in the philosophy and work ethic of the people who make them happen. 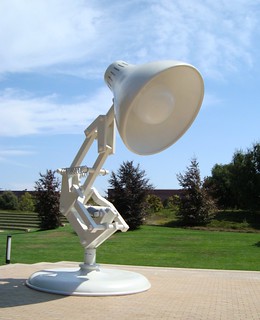 In Building the Next Pixar, Fast Company magazine profiles some of the few people who have left the company and how they are applying the values learned at Pixar in new ventures.

The whole thing is worth your time, but here are a couple of quotes that have stuck in my head for some reason.

A computer will make something perfectly square, perfectly spherical, and that’s just ugly and boring. All of your time is spent kind of messing it up, which is the opposite of most people’s jobs…the real world is a big old mess and most people’s time is spent tidying it up. – Suzanne Slatcher, animator now working in food marketing

Maybe we shouldn’t work so hard to tidy up the world, and spend more time embracing and understanding the chaos instead.

They [Pixar management] threw you into a lot of different things to try and eliminate fear from the creative process. This meant improv classes, drawing classes, learning from people who were the best in their field–all in the interest of attaining confidence in your own artistic ideas. Fear is the biggest killer of creativity. In order to cultivate a strong creative environment, you need to make people comfortable in expressing their ideas. – Gabriel Schumberger, layout artist and technical director, now director of digital creative for Disney Publishing Worldwide.

Do we work to eliminate fear from the creative process in schools? Or even address the process at all? We certainly talk a lot about kids and creativity.2Image by Satomi Ichimura on Flickr, used under a Creative Commons license.

The Mathematics of Storytelling

The question from a couple of posts back wasÂ “When are we ever going to use this?”, something frequently asked by students in my Algebra and Geometry classes.

The Senior Scientist from Pixar offers an answer for kids interested in animation and movie making as he explains how math is used in their storytelling.

The topic of DeRose’s lecture is “Math in the Movies.” This topic is his job: translating principles of arithmetic, geometry, and algebra into software that renders objects or powers physics engines. This process is much the same at Pixar as it is at other computer animation or video game studios, he explains; part of why he’s here is to explain why aspiring animators and game designers need a solid base in mathematics.

And how important is that solid base?

Pixar’s biggest competitive advantage now is its ability to use this math-driven technology not to make better shapes but to tell better stories. DeRose and Pixar aren’t sitting on their laurels. “Somewhere out there, a brilliant kid and their friends are working in their garage” using and improving on tools like Blender, DeRose tells the assembled children and adults at MoMath. “They will be the next Pixar.”

However, there’s a big disconnect between what DeRose is discussing and the reality of the math curriculum in most schools. During their time in K12 classroomsÂ very few kids will get to study the creative applications of math used in animation or be allowed to use any of that “math-driven technology”.

We gotta stick to what’s on the test.

Start With “We’re Gonna Screw Up”

From a profile of the creative process at Pixar:

In a world that is obsessed with preventing errors and perfection, perhaps it’s ironic that despite 11 straight blockbuster movies, Pixar cofounder and President Ed Catmull describes Pixar’s creative process as “going from suck to nonsuck.”

That’s because Catmull and Pixar’s directors think it’s better to fix problems than to prevent errors. “My strategy has always been: be wrong as fast as we can,” says Andrew Stanton, Director of Finding Nemo and WALL-E, “Which basically means, we’re gonna screw up, let’s just admit that. Let’s not be afraid of that.” We can all work this way more often.

Wouldn’t school be a far different place if we approached teaching and learning the same way?