Score One For Photographers’ Rights

WE DON’T KNOW whether to cheer or cry over news that the federal government has acknowledged the public’s right to take photographs and record videos in public spaces outside government buildings. It’s great that the people’s First Amendment rights have been affirmed. But isn’t it sad that there was ever a question?

However, despite lawsuits, settlements, and notices to security staff, I doubt the harassment of photographers in DC and elsewhere will be ended.

There is far too much paranoia when it comes to imagined security threats posed by people carrying cameras.

You Only THINK You Own It

If you own a product, do you then have the right to give or sell it to someone else? Millions of yard sales every year would seem to say “yes”.

And when it comes to intellectual property-based items (books, for example), the Supreme Court has even given the concept a name: the first sale doctrine.

However, at least one software publisher believes that piece of legality does not apply to their products. That they have the power to restrict an owner’s right to resell them. 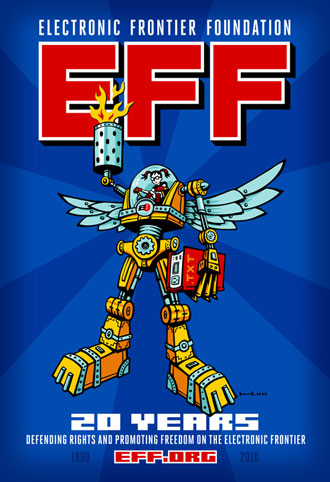 Autodesk has appealed, arguing that so long as its license agreements recite the right magic words, it can strip purchasers of any ownership in the CD-ROMs on which software is delivered. If that’s right, then not only don’t you own the software you buy, but any copyright owner can simply recite the magic words and effectively outlaw libraries, used bookstores, and DVD rentals, among other things.

Ah, the magic of the end-user license agreement (EULA) which we’ve all had the pleasure of reading* during a long pause in the software install process. Right? :-)

Anyway, the EFF, which just celebrated their 20th anniversary, is involved in this and many other battles over consumer rights when it comes to digital property.

Unfortunately, most media companies these days, including software publishers, want to move away from the concept of “ownership” when you pay money for their products, whether it’s a physical package or digital download.

An idea that is only reinforced by files locked up with DRM, such as the books you buy for reading on a Kindle (something I hope is missing from Apple’s iPad book reader).

BTW, if you can afford it, contribute a few dollars to the EFF to help them continue defending our rights to own and control the media we pay for, no matter the format.

* I’ve read a few EULAs over the years, mostly so I can help people understand their fair use rights (the one that used to come with the Microsoft Office clip art collection was rather interesting). While I can’t tell you exactly what the EULAs say for any of the commercial software on my current MacBook, I’m pretty sure most read similar to Autodesk’s.

Another example of a government restricting the rights of it’s citizens in the name of keeping them safe.

In Britain, cops have the power to search you if you take a picture of a “sensitive” area, but they won’t tell you which areas are “sensitive,” because they’re so “sensitive.”

The British Journal of Photography is trying to use the UK Freedom of Information Act to find out which places in Britain have such precious photons that people who collect them without authorization can have their civil rights violated, but so far they’ve been unsuccessful.

Unfortunately, our own security agencies pull the same kind of Catch-22 on photographers in this country.

There are plenty of places around DC where you’ll be harassed for taking pictures but, in many cases, don’t expect to know in advance where they are.

Real Networks (are they still around?) is trying to make itself relevant again by releasing a $30 program that will allow users to make digital copies of their DVDs.

With some restrictions to appease the big media companies, of course.

The software, which will go on sale on Real.com and Amazon.com this month, will allow buyers to make one copy of a DVD, playable only on the computer where it was made. The user can transfer that copy to up to five other Windows computers, but only by buying additional copies of the software for $20 each. The software does not work on high-definition Blu-ray discs, which the movie industry has even more aggressively sought to protect from illicit copying.

No thanks. Handbrake and other open source programs will do the same thing at no cost with no restrictions.

However, the larger point is that the restrictions Real’s software imposes shouldn’t be necessary.

I paid for the media. I should have the right to view it on any device I like without paying additional fees or getting permission from anyone.

Real, this program, and the whines that come from the MPAA about people “stealing” their content are all irrelevant.

Can a student be punished for language critical of school administrators posted on their personal blog? How about if the principal finds one of the words employed offensive?

In at least one case, an appeals court says they can.

The Court of Appeals noted that adults may have a constitutional right to use vulgar or offensive speech in order to make a point, but that it “may legitimately give rise to disciplinary action by a school” if a school is responsible for “teaching students the boundaries of socially appropriate behavior.” Although Avery made her statements off school grounds and outside of school hours, they were related to school activities and ultimately caused some level of disruption within the school setting.

If this was a wild rant with a purpose of inciting students to violent or illegal behavior, I might agree with this ruling.

However, if you read the entry, there is none of that. It’s actually rather tame with the possible exception of that one word used to describe the administrators. A word that goes unbleeped on broadcast television.

All of which makes the court’s action somewhat disturbing.

The decision concerns free speech advocates because of the cloudy nature of the blog post. No threats were made and no major student demonstrations occurred–at most, the students were a bit “riled up” (according to Avery’s testimony) over having their event possibly cancelled and their student council going to great lengths to turn the decision around. Most importantly, the decision will likely be used as further precedent in the future for schools (and possibly colleges and universities) to take action against students for their postings around the ‘Net.

It probably won’t be long before another principal decides to take action against a student for a blog post with no “bad” words, one that simply takes exception with school policy.