National Geographic says our national parks are changing, due to a warming climate and other factors, and looks at how our management of those wilderness areas must also change. As you might expect from Nat Geo, the photographs that accompany the article are wonderful. (17:00)

If you want to learn something about virtual reality, The Guardian offers their complete guide to the topic. It’s a pretty good overview of the current platforms, with a short list of currently available software for each (mostly games, of course). But don’t count on this article being accurate for very long since the field is moving fast. (20:00)

Way too much has been written about the election results and I’ve been avoiding as much of it as possible. However, this intelligent essay by Baratunde Thurston is worth your time. Empathy is indeed a two-way process. (12:00)

In a small Virginia town, about 90 minutes from here, the Library of Congress is using a Cold War-era nuclear shelter to protect and restore the world’s film history. Even the crappy stuff. This short video checks in with the man responsible for dealing with the very oldest stuff, films printed on fragile and very combustible nitrate. (3:09)

When times are tough, people sing the blues. And who better to sing the blues than a white British actor. Seriously though, Hugh Laurie does an excellent job, on piano as well as singing, with the New Orleans classic St. James Infirmary. The late, great Allen Toussaint leading a band of outstanding jazz musicians completes a near perfect package. (7:00)

Who do you trust and does it make a difference? In a recent episode of Freakonomics, they look at the concept of societal trust and ask what can be done to reverse the decidedly downward trend in the US and UK. Did you know that “societies where people trust one another are healthier and wealthier”? (27:42)

NASA launched a mission this week that sounds really cool. The spacecraft will make a seven year round trip to an asteroid and “return a substantial amount” of it’s material to Earth. Of course, that’s no trival process but the story of the collection device that will be used is fascinating and a build that would be right at home at any Maker Faire. (about 4 minutes)

In a short piece on their UK site, Wired reviews some ongoing research that asks if virtual reality can make people more emphathetic. The answer, of course, is that it’s far too early to arrive at any conclusions. But this part is certainly good to remember: “Anything that has to power to influence our behavior for the better also has the power to influence it for the worse.” (about 4 minutes)

On his blog, Nicholas Carr, one of the more intelligent critics of the internet and it’s impact on society, posted the introduction from his new book in which he reviews some of the early promise of the web as an “engine of liberation”. Instead, he concludes that it’s more The World Wide Cage. Even if his ideas lean more to the negative side than I like, Carr’s writing always is worth reading. (about 11 minutes)

A recent segment of the Freaknomics podcast (hosted by the co-author of the book with the same title) is about why The Future (Probably) Isn’t as Scary as You Think. The program is a discussion with the author of a book called The Inevitable and he really is optimistic about what he sees not too far ahead. (34:58)

In case you missed it this week (which would only happen by staying completely off the web), Thursday was the 50th anniversary of the debut of Star Trek. Among the flood of memorial material posted, one of the better retrospectives was a segment from On The Media that was actually first recorded ten years ago. In it, one of the show’s hosts explores the concept of Trek through the “infinitely powerful engine behind it all: the fan”. (15:00)

When it comes to conspiracy theories, the idea that the government has been hiding evidence of space aliens for 60 years is at the top of the dumb list. In a short video essay, Bill Nye offers some facts and rationality to explain why the government is not hiding extraterrestrials from us. He is, however, optimistic enough to believe we will eventually find alien life, although probably not like in the movies. (6:18)

Ok, the one question most people ask me every year when I get back from ISTE is: what was hot? What new technology was everyone talking about? Where did the crowds gather?

And the answer for 2016, of course, was VR; virtual reality.

During the conference, I heard more than a few people declared that virtual reality was going to revolutionize education (including the Sunday keynote speaker). Many vendors were offering VR “solutions”, even if it was just their old products with a VR component grafted onto the side.

And around the convention hall there were multiple scenes like this one (at the Google booth) with people staring into cardboard boxes and plastic Viewmasters, tilting their heads to get a better view. Of something. 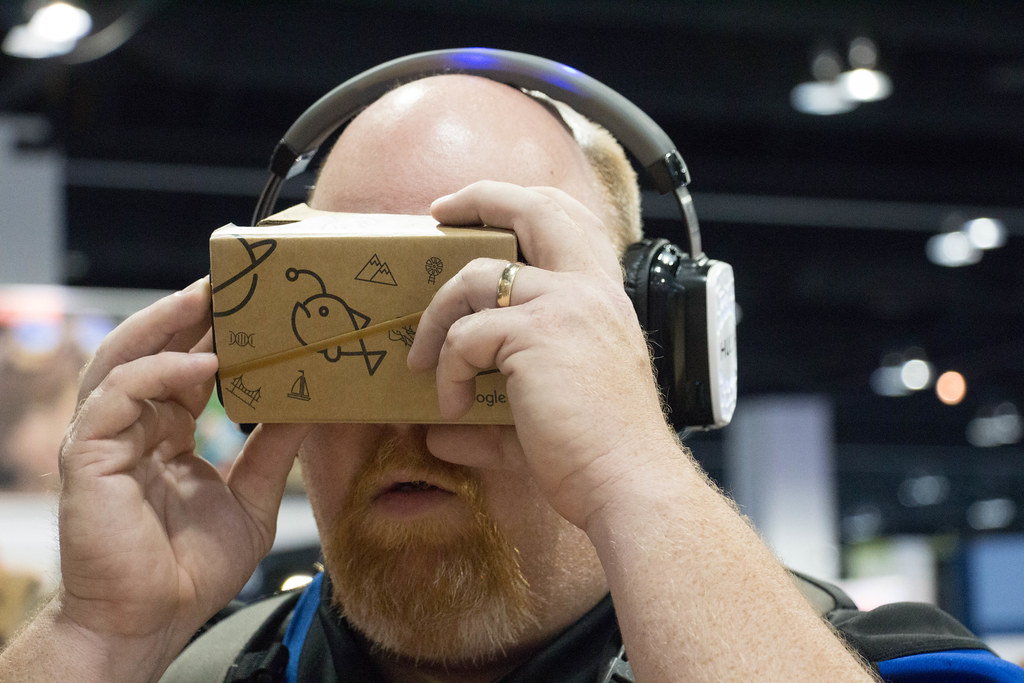 Of course the current reality in VR is that the technology is not even close to the threshold of revolutionary when it comes to education.

First, let’s face it: our profession is evolutionary at best, and it’s a pretty slow change at that. But more to the point in this case is that the technology to produce VR of the quality that would make a “revolutionary” impact for learning currently looks more like this: 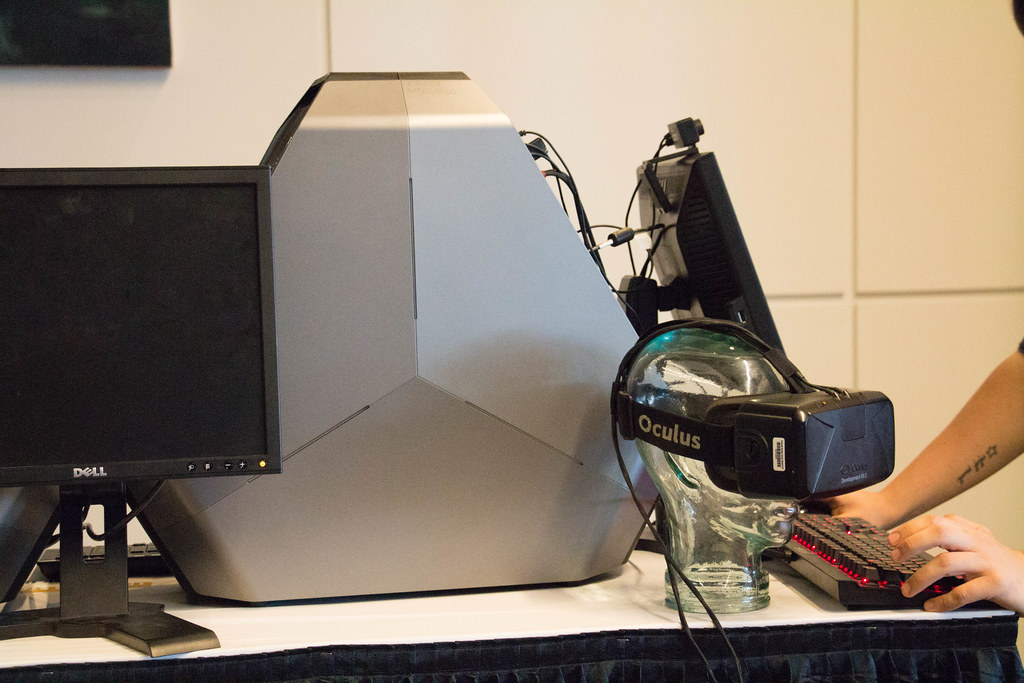 A big non-portable machine, fast CPU, powerful graphics processor (re: expensive), with a headset and software costing about half that of the computer to run it.

However, I’m not disparaging the push for virtual reality on display at ISTE. It’s only the beginning for this medium, and I’m actually very optimistic that VR will become an important tool for student learning in the very near future.

However, just not as the new, “exciting” (re: very profitable) content delivery system that Pearson and other companies at ISTE are hoping for.

In just the past few years, the tools for creating virtual reality experiences have become both easier to use and much less expensive. I believe that VR, both still images and 360 video, could become a wonderful creative tool for students (and teachers) to tell stories and present ideas.

It happened over the past ten years or so for 2D video, as the availability of good cameras packaged in relatively inexpensive mobile devices and powerful editing programs made the technology accessible to many kids. Not to mention the rise of YouTube and other online channels for easy, ubiquitous distribution.

Something similar is going to happen for VR. I’m already doing sessions that show teachers and others an easy process to take and publish basic immersive images with their smartphones (and why they’d want to). And the tools are getting better all the time.

Good quality dedicated VR cameras are already well under $1000. Which sounds expensive but not considering the cost of getting lower quality images just a few years ago. Or what we had to go through in the late 90’s when I first started playing with this technology (anyone remember QuickTime VR?).

Now I’m not going to tell you that every student should study virtual reality (like STEM, coding, and whatever comes next). Students deserve some choice in what they study. VR is a creative tool with great potential, one of many, digital and not, students should have the option to explore and use while they are in our K12 classrooms.