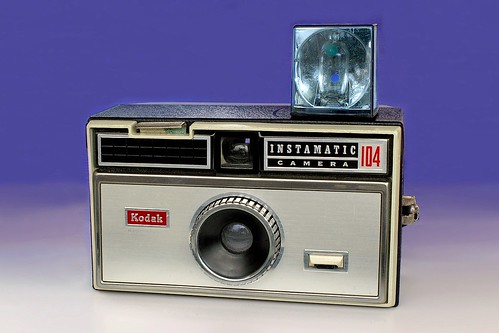 In an interesting essay from his blog, tech writer and photography enthusiast Om Malik makes the case that that the iPhone is today’s version of the Brownie Camera.

First released in 1900, the Brownie was the very successful centerpiece of Kodak’s attempt to make photography easy and inexpensive for the average person.

The camera that took this one giant leap further, arguably changing the human relationship with photos and visual communication, was a humble, innocuous little brown box known as “The Brownie.” Designed by Eastman Kodak engineer Frank Brownell, it was made out of cardboard, wrapped in cheap imitation leather, and secured with nickel fittings. While it sounds unremarkable by today’s standards, it was something to marvel at the turn of the twentieth century.

Eastman wanted people to pop in a film cartridge, look through the viewfinder, and turn a switch to capture the photo. It was spectacular in its simplicity and ease of use, and it was perfectly geared toward a new category of photographers. “Any boy or girl can make good pictures with a Brownie,” an early advertisement for the product claimed. Like any ad, it was an exaggeration, but not a huge one. The Brownie had drastically and undoubtedly simplified the photography experience.

The Brownie was certainly a major step in democratizing photography, and Kodak sold millions of various editions of the camera over a half century.

However, I would argue that an even better example that changed the “human relationship with photos and visual communication” was Kodak’s Instamatic line of cameras that came 60 years later.

In addition to taking black and white images, Instamatic cartridges for color photos were also available (at a higher price, of course), as well as offering the option to make standard printed versions of the pictures or slides that could be shown to a large group using a projector. Which also introduced the long, boring vacation slide show.

But taking a picture with these cameras was always the easy part of the equation. A much greater advancement for the Instamatic over the Brownie line, and which makes it a more appropriate camera for this comparison, came in the processing of the film.

Getting your Brownie film developed was not a simple matter. In addition to being expensive, it took a relatively long time and was usually only available in large cities.

When Kodak released the first Instamatic model in 1963, they had already begun establishing processing labs all over the country that could return a set of pictures in only a few days at a reasonable price. That technology quickly improved, with significant cost reductions, so that by the end of the decade, users could drop their film in a box at the local supermarket or drug store and pick up the results soon after.

By the early 70’s, one-day photo processing services became common, with thousands of drive-through kiosks popping up at your local shopping center. A few years later that one-day turned into one-hour processing.

More than even the Brownie, the Instamatic line of cameras had a far larger impact on popularizing photography for the average person, and did it in a much shorter time frame. It was inexpensive, dirt simple to use, and the results were actually pretty good due to the cameras having a built-in exposure meter and other electronics.

With the Instamatic, and a whole host of competitors that quickly appeared, the idea of anyone being a photographer stuck. By the time camera-equipped mobile phones were introduced early in this century, no one had to sell people on the concept.

We were ready to embrace photography as an everyday part of life and fundamental to the way we communicate.

Now, let’s talk about those Super-8 movie cameras and our relationship with video…

The image is of the Kodak Instamatic 104, which was my first camera, a gift from my parents when I was in high school. The image is from the Camera Wiki.